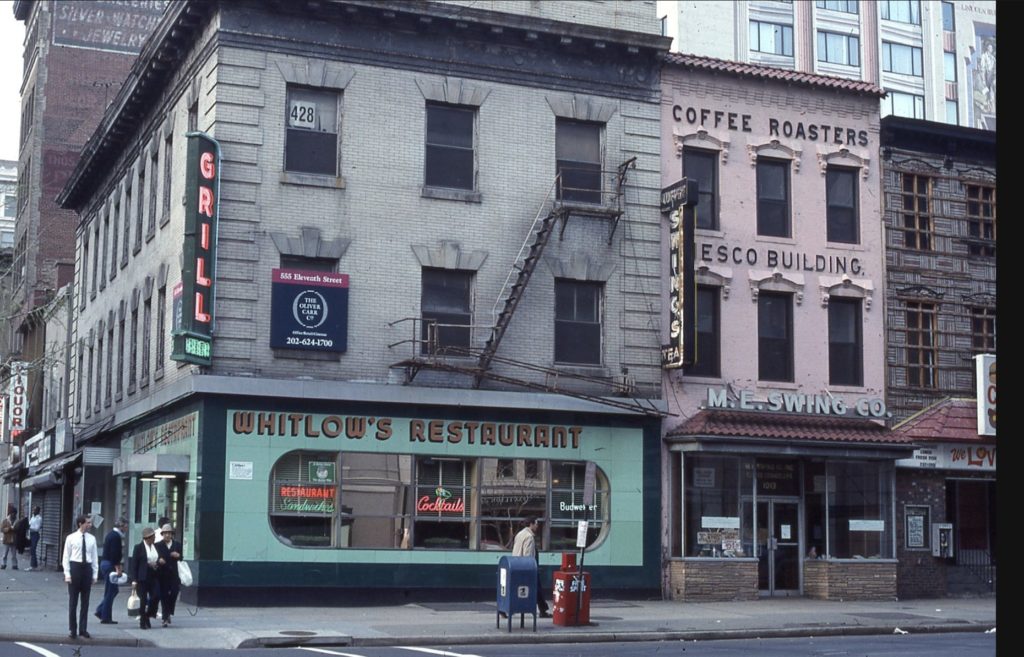 undated photo of 11th and E Street, NW via Whitlow’s

Any guesses as to what neighborhood? Thanks to all who sent word about the Whitlow’s announcement: END_OF_DOCUMENT_TOKEN_TO_BE_REPLACED 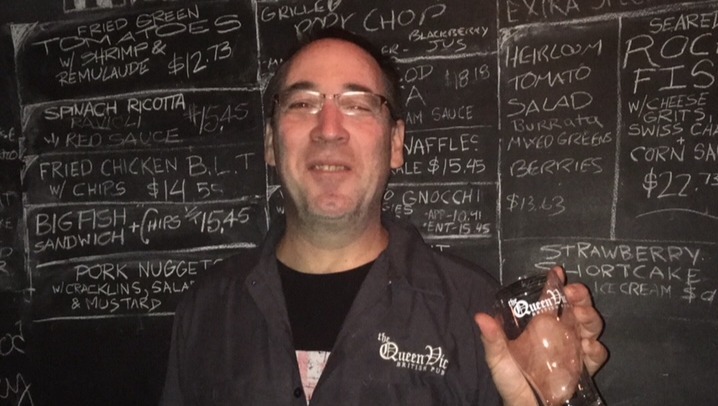 Very sad news readers have passed on from the Queen Vic:

“Some of you may have heard that our friend Joe Schinosi passed away earlier this week. Joe helped us open The Vic back in 2011 and was our friend long before then. His death has hit us hard and we are still struggling to process it so we don’t have the words right now. Joe’s funeral will be held on Friday August 12th at 10.30am at Holy Trinity Catholic Church. Please consider donating to help his family with the costs.” 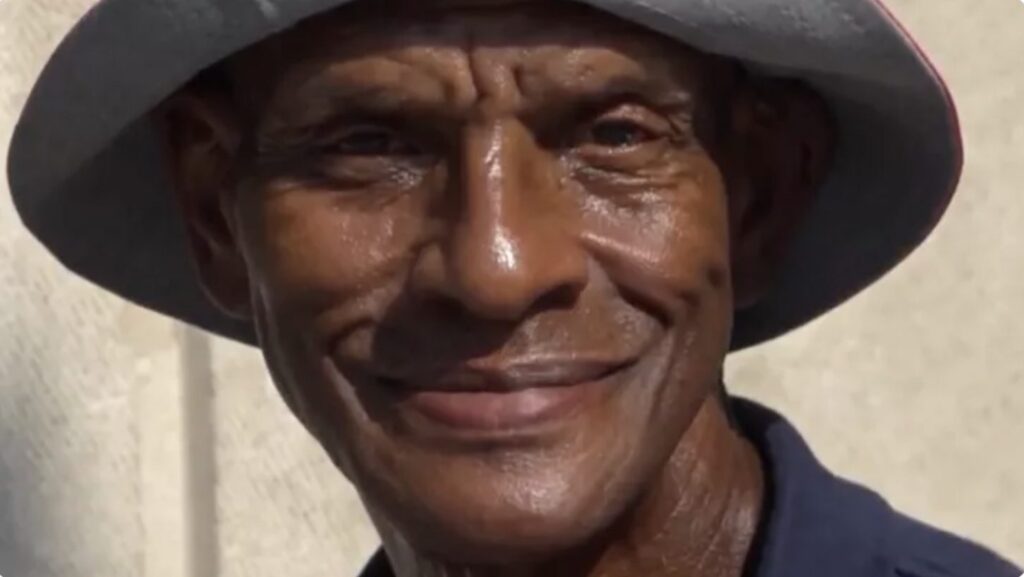 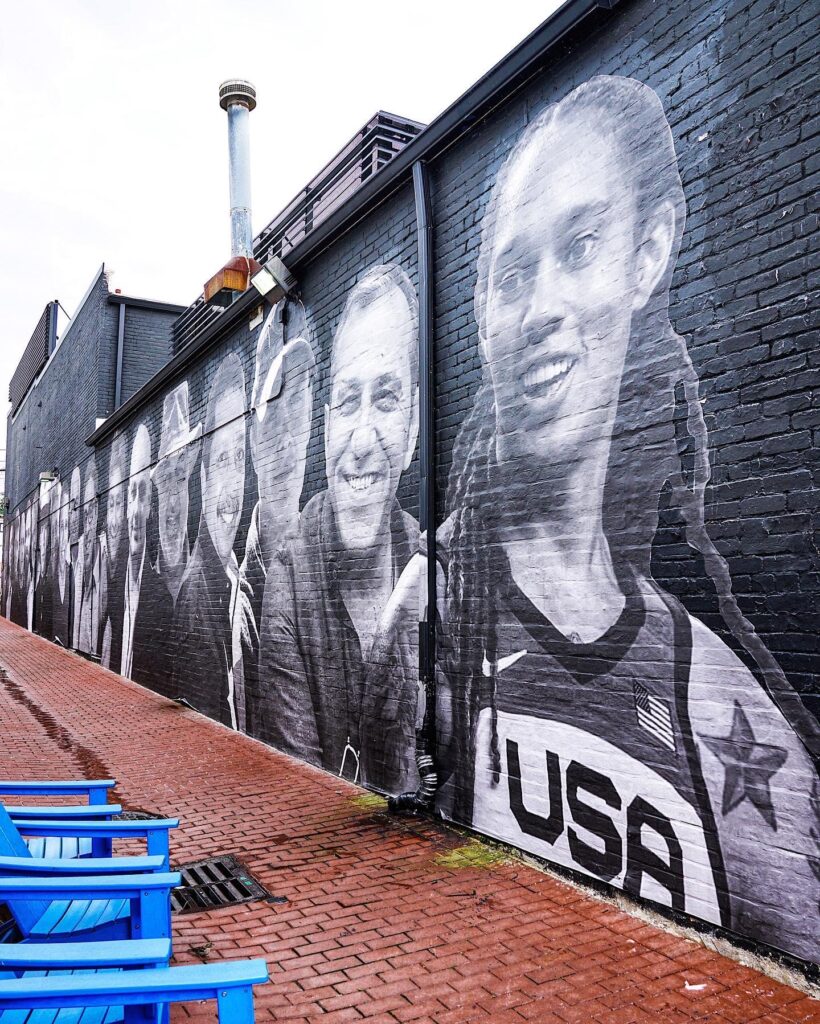 “On July 20th, the Bring Our Families Home Campaign, a campaign led by family members of Americans wrongfully detained or held hostage abroad, will be unveiling a public mural in the Georgetown neighborhood of Washington, D.C. The mural, designed and installed by Iowan artist Isaac Campbell, will use the wheat paste technique to capture the faces of 18 Americans held hostage or wrongfully detained abroad. END_OF_DOCUMENT_TOKEN_TO_BE_REPLACED 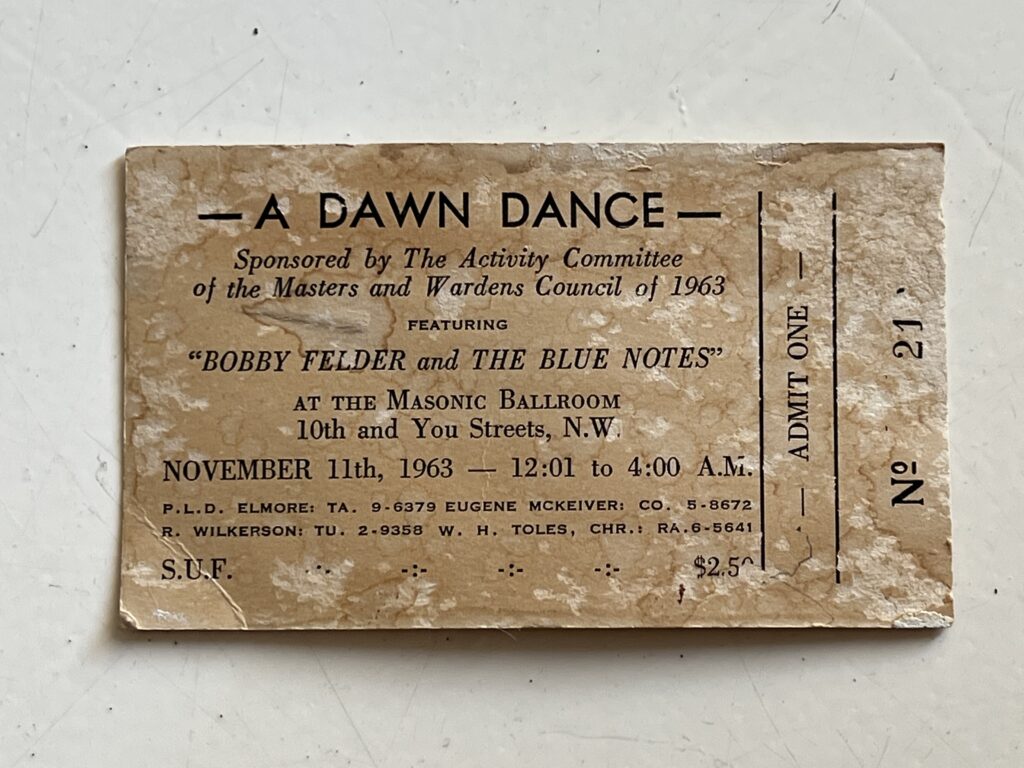 Thanks to Jon for sharing:

“I was renovating a closet in my Adams Morgan row house and found this jammed behind the shelf. It’s a $2.50 ticket from 1963 to a midnight party with jazz band, Bobby Felder and The Blue Notes, at the Prince Hall Masonic Temple on U (ahem, You) St. 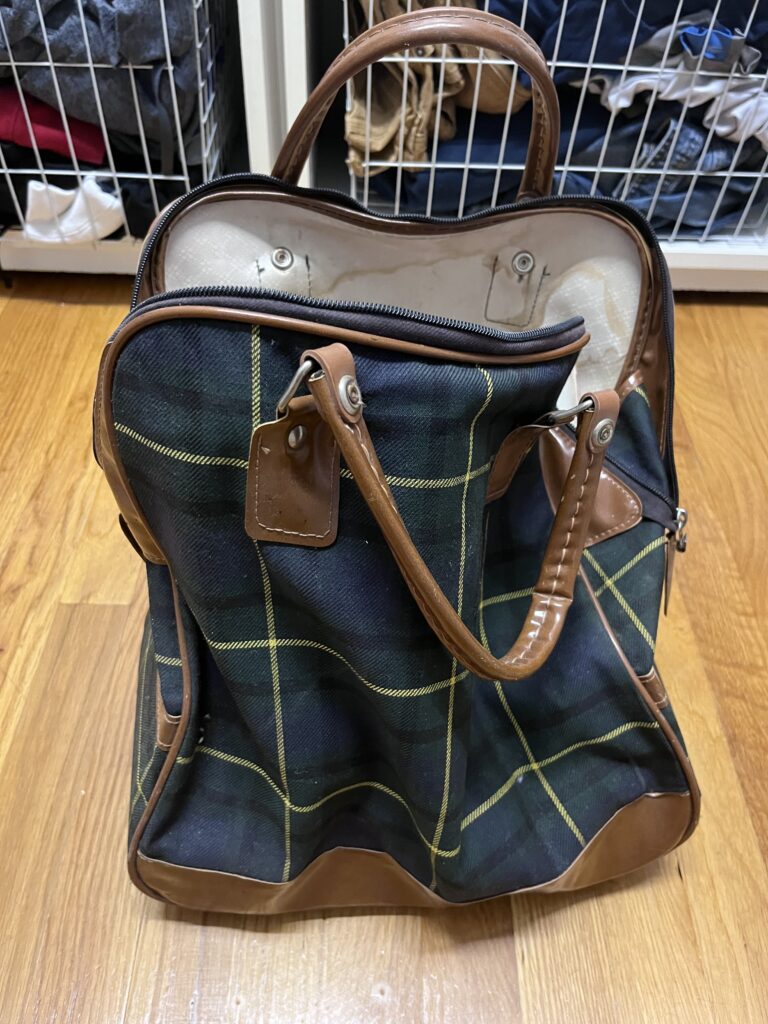 Thanks to Ellen for sending: “While cleaning out our attic in Tenleytown, my husband found what looked like a small travel bag in a crevice of the attic. He had to use a crowbar and rope to fish it out. END_OF_DOCUMENT_TOKEN_TO_BE_REPLACED 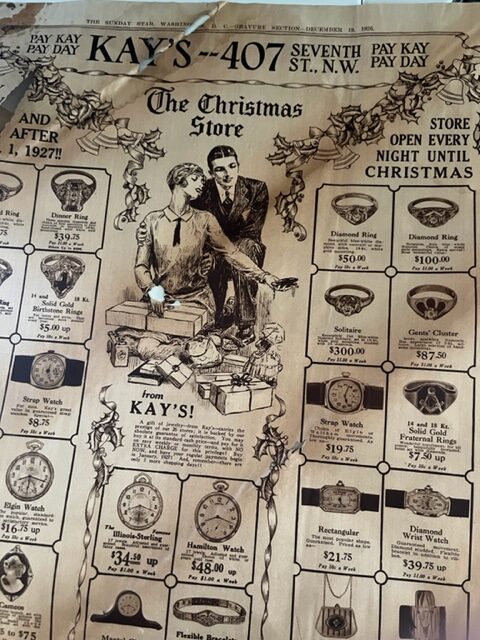 Thanks to Sean for sharing:

“Perfectly preserved section of the The Sunday Star with an advertisement for Kay’s on 7th street. This was used at underlay in a kitchen pantry in Tenleytown. House was built in 1926 papers dated December 19th 1926. $50 for a diamond ring!”

If you have a photo of a neat find from your house, place of work or neighborhood please send an email to [email protected] thanks. Please let me know where/what neighborhood you found it in too. Thanks. 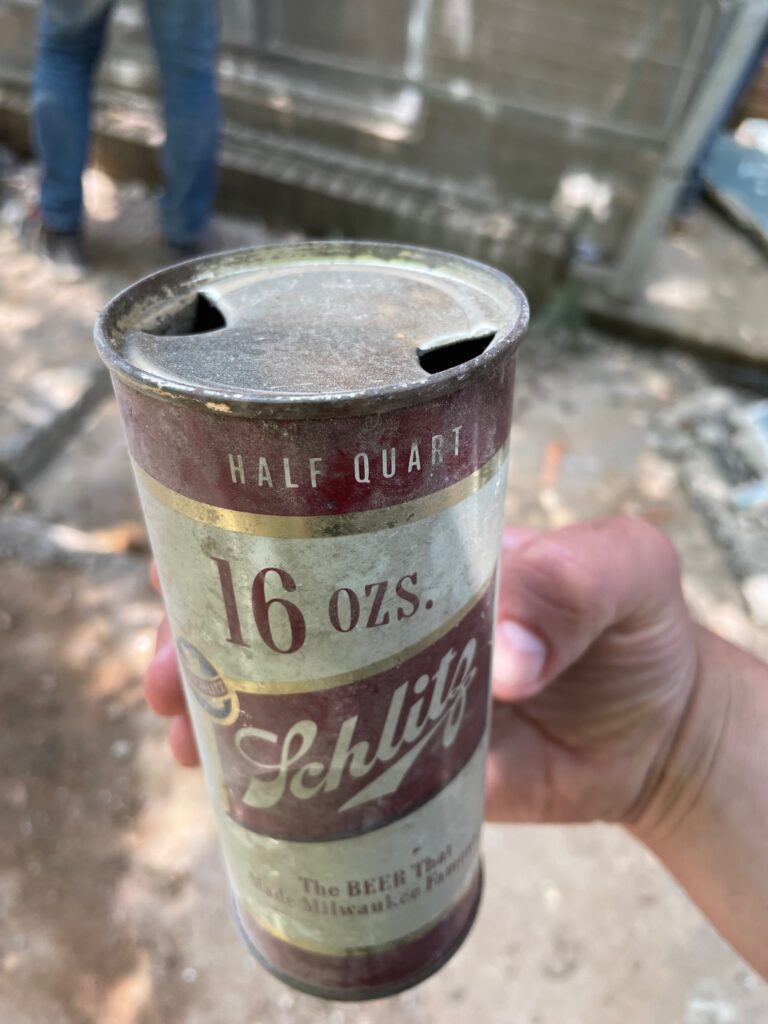 Thanks to J. for sending from his renovation in Tenleytown. END_OF_DOCUMENT_TOKEN_TO_BE_REPLACED 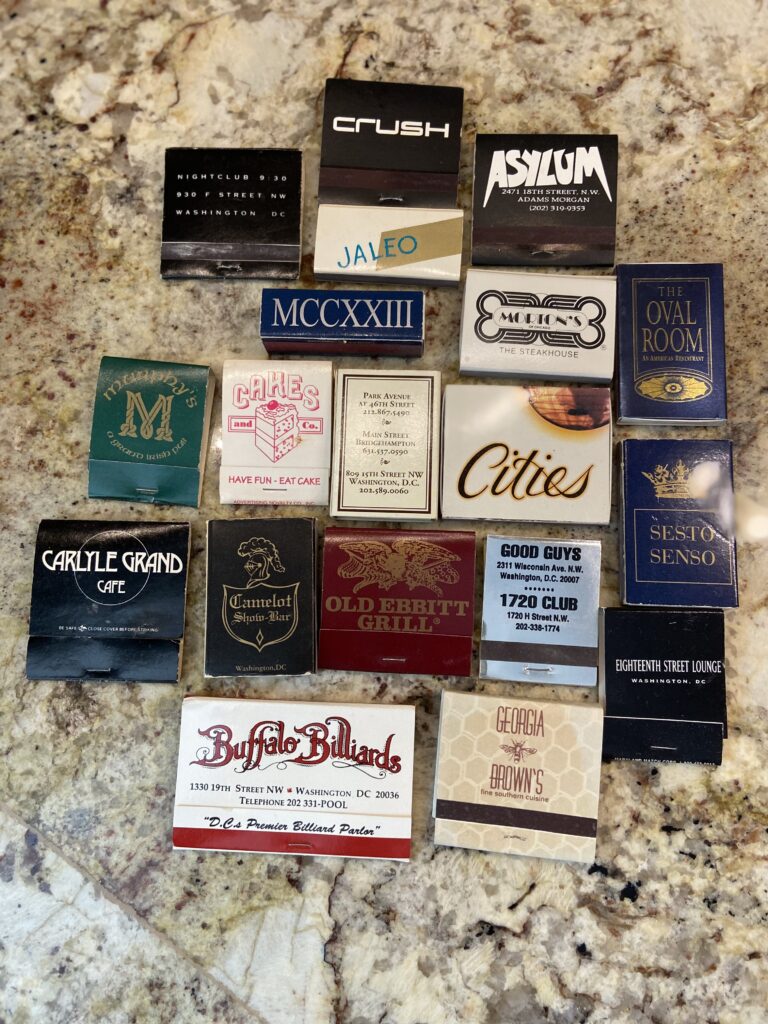 Cleaning up my house, I found these treasures in my bowl of vintage matches. END_OF_DOCUMENT_TOKEN_TO_BE_REPLACED 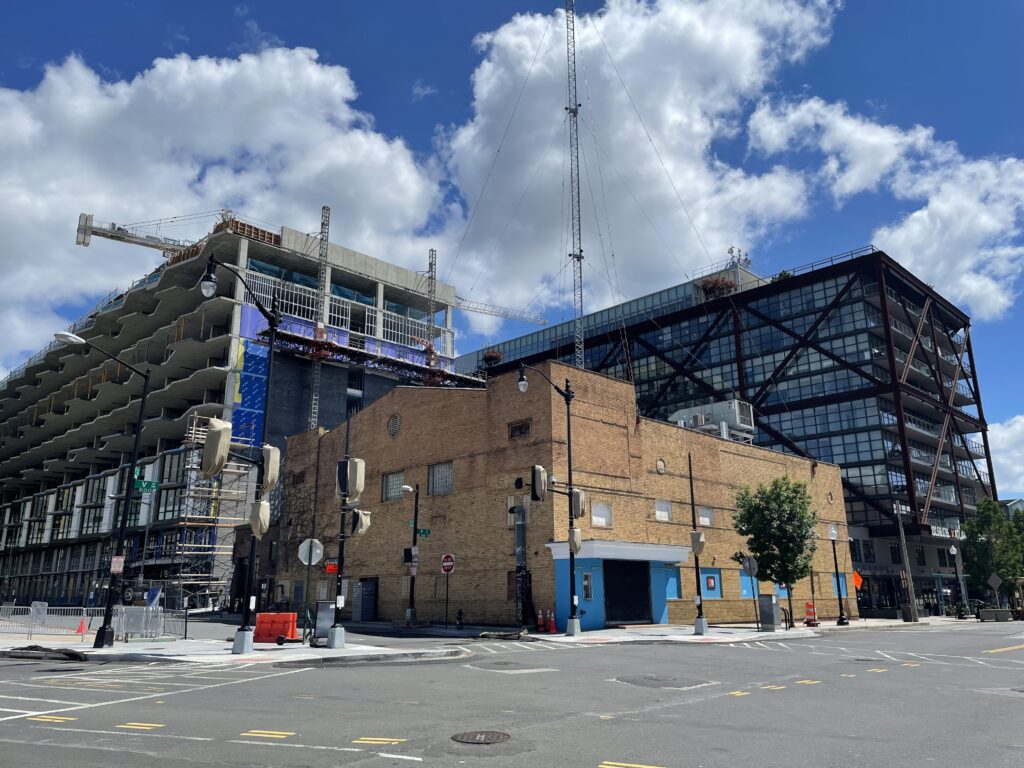 Following the news of Bistro Du Coin’s 22nd birthday, Flavio reminds us that yesterday was the 9:30 Club’s 42 birthday!!

A closer look at that new building going up behind them: END_OF_DOCUMENT_TOKEN_TO_BE_REPLACED