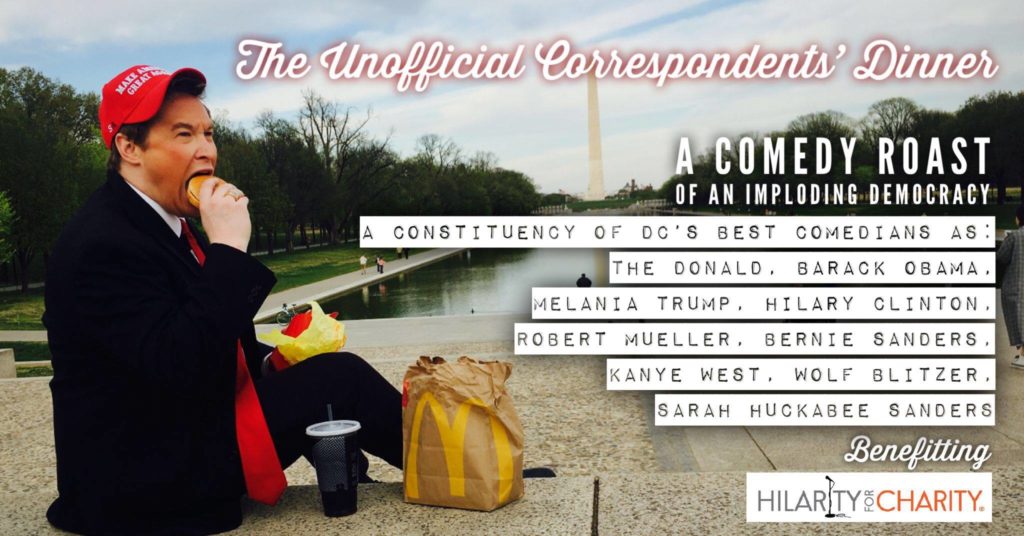 “How lame is it that the keynote speaker to this year’s White House Correspondents’ dinner is boring old historian Ron Chernow?? Wouldn’t you rather see a sharp-tongued and super woke comedian like, say, Haywood Turnipseed Jr. whose performed at the Kennedy Center take the stage? Wouldn’t it be fun if The Donald himself made an appearance??

Forget the Nerd Prom the night before, The Unofficial Correspondents’ Dinner is a first-of-its-kind Political Roast show that will feature a constituency of DC’s best comedians, in character, for a bipartisan bashing of epic proportions.

What would an uncensored Barack Obama say to The Donald? What will Sarah Huckabee Sanders say when the gloves are off? Will Robert Mueller bring the house down? What does Melania have up her sleeve for Bernie and Hillary? Oh, and this President Trump will be both attending and headlining the show with his own jabs and crosses for all of the “low I.Q. individuals.”

When the dust settles and laughing ends, money will have been raised for Seth Rogen’s Hilarity for Charity, a non-profit organization dedicated to raising awareness, inspiring change, and accelerating progress in Alzheimer’s care, research, and support.

And while the Hinkley Hilton is, apparently, booked, our event will take place at the even classier DC Comedy Loft at the Bier Baron, 1523 22nd St NW on Sunday, April 28th at 7:30 PM.“

More Stories
“Description of work on the signage outside indicates coffee shop”Greek Deli Ordered Closed by DOH!! “After 30 years with no notice (ordered closed) because we don’t have a restroom on premises.”