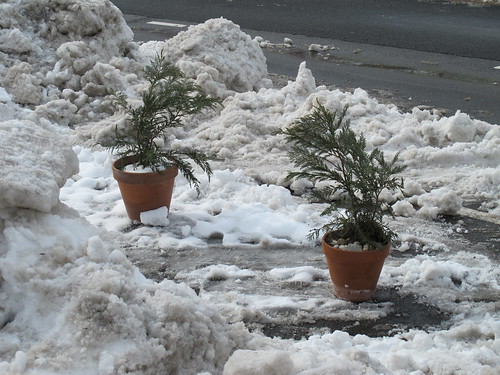 We’ve debated whether or not it’s legit to save a parking spot many times before. Chairs are obviously the mostly commonly used item so I just wanted to show a couple interesting pieces I spotted around town. My neighbor had the best comment after she came back from a walk. She said it looked everyone was having a bad garage sale.

Below is a children’s chalkboard: 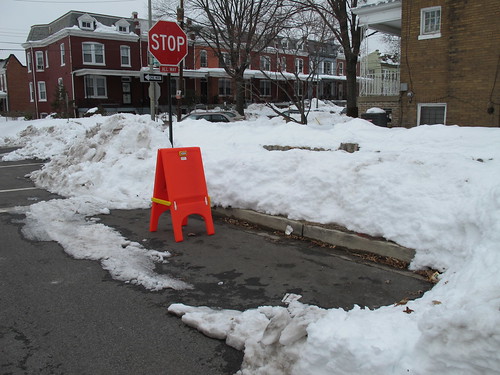 And after the jump you can see the most disturbing item to save a parking spot that I encountered. END_OF_DOCUMENT_TOKEN_TO_BE_REPLACED 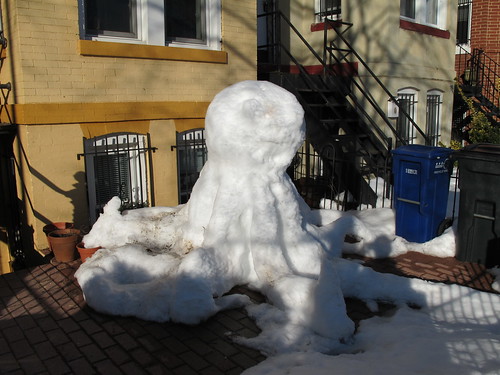 Gotta respect the octopus above and dinosaur below. 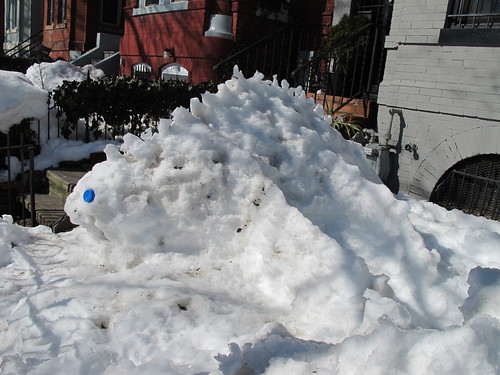 And this was rather timely as well: 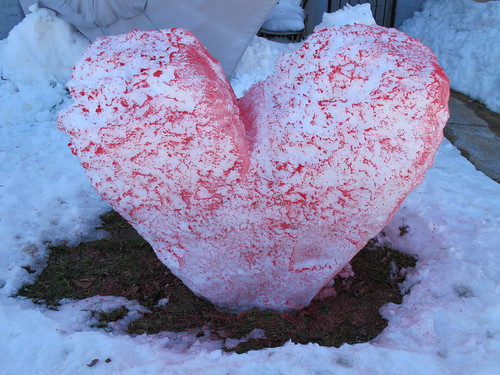 For fans of the original cabin fever video I was just sent one more. Hopefully most folks are out and about by now but this video from Amelia and Nick captures the mood pretty well.

Thanks to Marc from 2 bars + 3 stars for sending.

Warning do not watch if you have recently ingested hallucinogenics…

Thanks to MSNBC for sending the word:

“Due to late breaking news on Clinton this didn’t run on the broadcast last night but it was posted online… We were out shooting on park road all day…thought the neighborhood might like to see it. Everyone was really friendly even in the midst of sno-verload. Thanks Park Road!”

Visit msnbc.com for breaking news, world news, and news about the economy 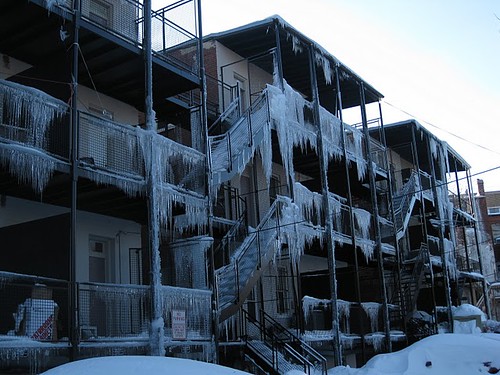 Thanks to a Emily for sending in “Icicle Alley” (between Park and Monroe, 14th and 16th streets).

Submit your photos via email or to the PoPville flickr pool here. 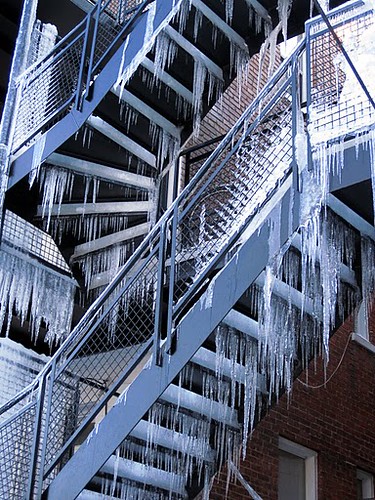 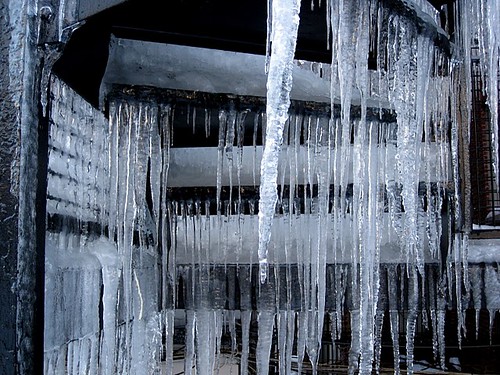 After the jump check out amazing before and after photos from Christopher who writes: 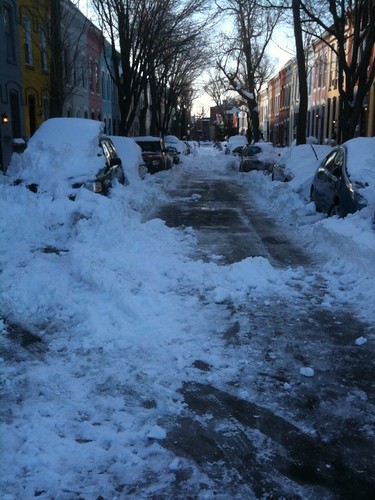 Just wondering if you know anything about the plowing of one way side streets? I’ve been hearing streets like mine never get plowed, which I guess makes sense since the street is so narrow and there really isn’t anywhere to plow snow except onto the parked cars. So I was extremely surprised to hear the sound of a large machine on my street this morning at 5am. I looked out the window and saw a huge snowplow being expertly driven by what looked like a guy in a park service uniform. I was extremely impressed at how skillfully he was backing down the narrow street to deposit the removed snow into a giant pile at the corner. But after about 20 minutes of listening to what sounded like an alarm clock outside my window, someone on my street apparently came out and said something to the guy and then he immediately left the street with only 1/3 of the block plowed. I noticed that several larger streets around me still are not plowed this morning.

So, was this guy just taking some pity on what was obviously a street that had not seen a plow since it started snowing last weekend? If so, thanks plow guy! And what are the chances the rest of my street sees another snowplow?” 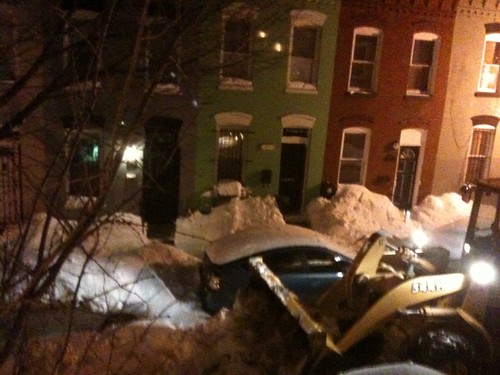 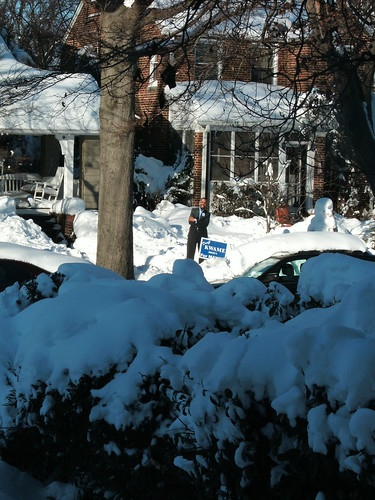 Well DCist covered the harsh words from MSNBC’s Chris Matthews yesterday. And I was personally surprised to see the following tweet Tues. night from At Large Council Member Kwame Brown:

“Mayor needs to clear residential streets of snow now. Only getting worse with today’s storm.”

Believe me I wish all the streets and alleys were plowed but that is simply impossible with back to back storms like this and a limited number of plows.

I’m not trying to be naive but it seems like a simple calculation. Paving all the streets is going to take time. (Especially given the delay due to the whiteout.) But my question is simple – is it fair to blame the mayor if your sidestreet wasn’t plowed yet? When do you think it is fair to assume that all the sidestreets will be plowed?

Overall how would you say the city/Mayor did given this is the most snow the city has ever seen? 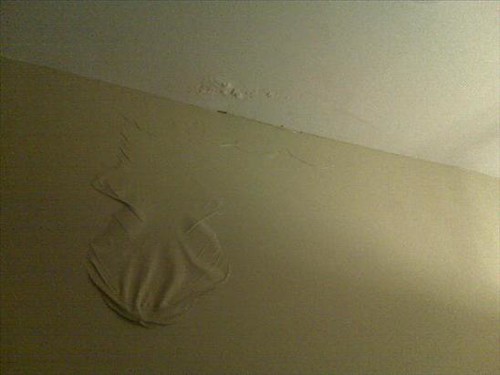 Next to a tree falling is this. PoPville twitter follower chelseydc is having some leakage problems from the snow. Even the lamp is filling up with water: 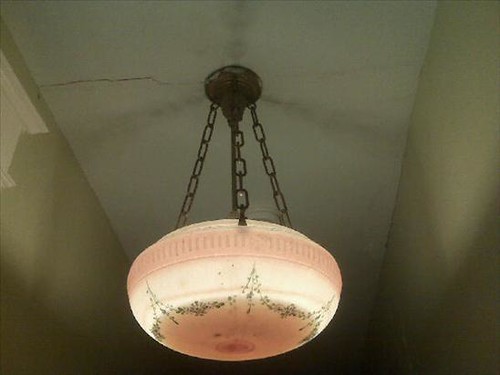 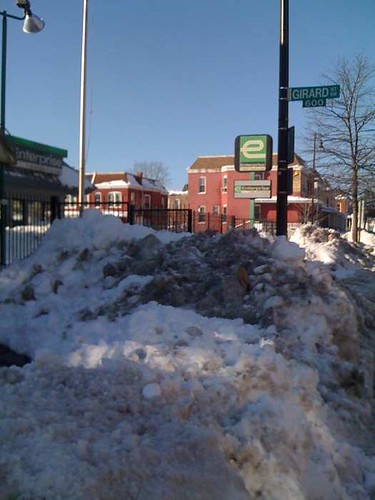 Aaron sends word that the Enterprise on Georgia Ave deposited all the snow from their lot onto the sidewalk. I checked it out and the piles were gigantic. But I did see a guy trying to chop through it so maybe they have fixed the situation. Aaron also sends this rather cool artistic path: 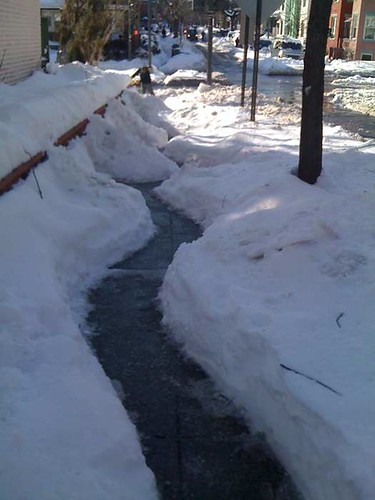