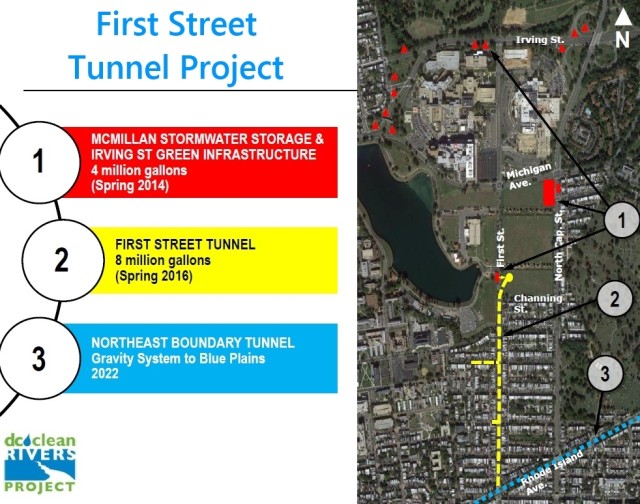 “If you thought holiday traffic was bad, consider this—it took DC Water’s tunnel boring machine named Lucy five months to travel 2,700 feet. Granted, she did it about 100 feet below ground and had to cut her way through 500 million pounds of sand, silt and clay. Lucy mined under First Street, NW, from Channing Street to Rhode Island Avenue, to create the First Street Tunnel. This tunnel segment will ultimately connect to the five-mile-long Northeast Boundary Tunnel in 2022.

“We are pleased to reach this important milestone in the project and are grateful for the continued patience of the impacted community,” said DC Water CEO and General Manager George Hawkins. “We will continue to work with the neighborhood to complete this essential project as soon as possible to provide flood relief for residents.”

From 2016 to 2022 the First Street Tunnel will store and then pump combined sewage up into the existing sewer system during and after rainstorms to keep it off of streets and out of basements. The First Street Tunnel is designed to mitigate flooding from undersized sewers in the Bloomingdale and LeDroit Park neighborhoods. It is part of the DC Clean Rivers Project aimed at significantly reducing combined sewer overflows to District waterways. END_OF_DOCUMENT_TOKEN_TO_BE_REPLACED 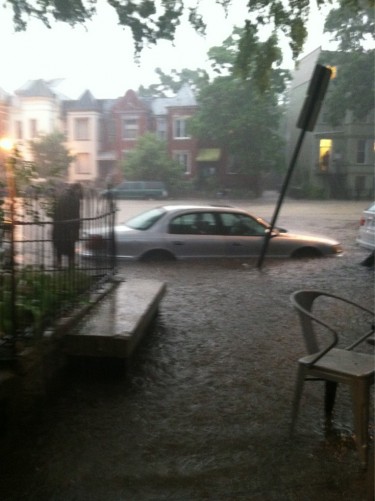 “In preparation for severe weekend weather and potential impacts from Hurricane Joaquin, DC Water is ramping up staffing and taking other actions to protect its customers, facilities and personnel. DC Water is closely monitoring flood-prone areas of the District of Columbia and crews are working around the clock to clear storm drains and prepare pump stations for increased flows. Emergency equipment and staff are standing by to respond to problems that may occur as a result of the storms.

DC Water is prepared to distribute sandbags to customers that live in the flood-prone neighborhoods of Bloomingdale, LeDroit Park and the 900 block of P Street NW. DC Water personnel will staff a sandbag distribution location for residents of the targeted neighborhoods at First Street and Rhode Island Avenue NW beginning today at 10:00 am. Please note that sandbags will only be distributed to residents in these targeted neighborhoods and they may be asked to show proof of residency at the distribution site.” 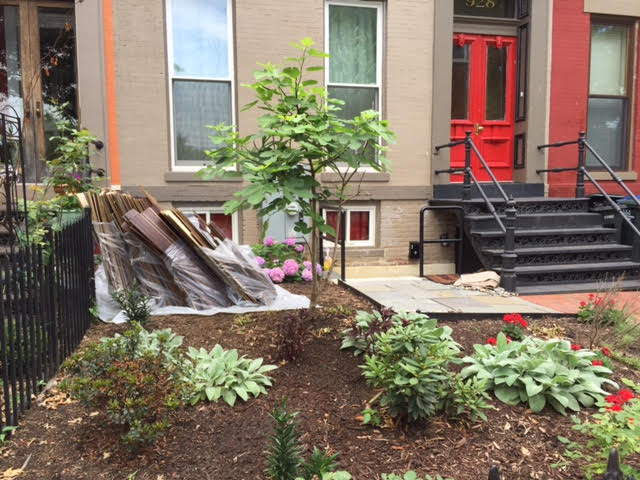 My boyfriend and I rent the basement unit of one of the row homes on this street. Sunday night, at approximately 5:50, my boyfriend noticed an odor in our unit and went to investigate. He went to our bathroom and saw dirty water coming out of the drain in the bathtub. Water was also coming out of the toilet. In addition, water was pouring out of the storm drains outside our front and back door – so much so that there was approximately 6 inches of standing water at one point. Some of this water leaked through the doors and into our apartment. We were fortunate that he was home and we were able to clean up the water immediately, with little damage. I’ve heard our neighbors were not so lucky. Our landlords and other residents immediately called 311. To my knowledge, no one from 311 responded to these calls – certainly, no one from any city agency came to our unit to investigate.

This is particularly troublesome because approximately one year ago, the apartment flooded while I was on vacation – requiring my landlords to make extensive renovations. It was later learned that DPW had not cleaned the leaves out of the sewers, as they are required to do, so the sewers were backed up. When it rained, water poured into my unit from the bathtub and the toilet – just as it did Sunday, damaging the floors and floor coverings. Just as troubling, my landlords told me they called DPW a few weeks ago to inquire as to when the sewers would be cleaned and received no response. Similarly, I was told that neighbors called 311 to inform them that just last week, following the heavy rain, there was significant standing water on 10th Street. To the best of my knowledge, there was no response to their inquiry either.

I’d love to hear suggestions on how to get DPW to respond to this now reoccurring problem. The fact that it affects our entire block leads me to believe it’s related to the sewer/water lines and not the individual units. I’ve contacted Rep. Evans and our ANC reps, but additional suggestions are welcome.” 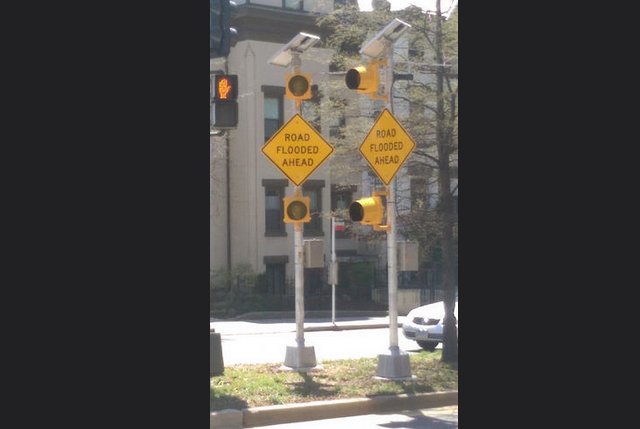 A reader writes in:

“Just noticed these new flashing FLOODING signs in Bloomingdale at the intersection of Rhode Island Ave NW and North Capitol Street. Seems odd they put up permanent signs when they are supposedly fixing the problem now.”

“Soon, Lucy [1,582-ton tunnel boring machine] will begin boring a tunnel deep under First Street NE, which will, hopefully, solve a longstanding flooding problem in the neighborhoods of Bloomingdale and LeDroit Park.

When completed, the 2,700-foot tunnel will hold excess rainwater and sewage and then slowly pump it back into the treatment system after a storm has passed.” 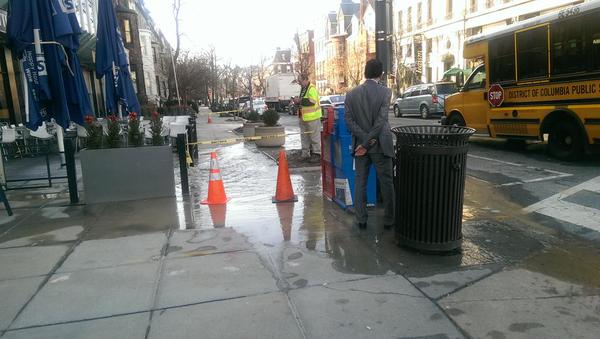 @andresdavid tweets us just before 3:15:

Earlier this morning we saw the one at 18th and S Street, NW. 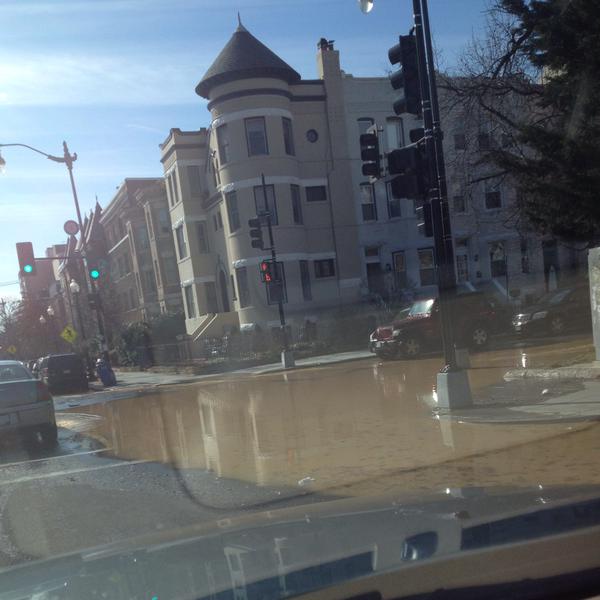 Thanks to a reader for sending – I’m guessing a water main break.

“Looks like it’s a 6 in main break. We’ll start repairs today. Thanks again for letting us know.” 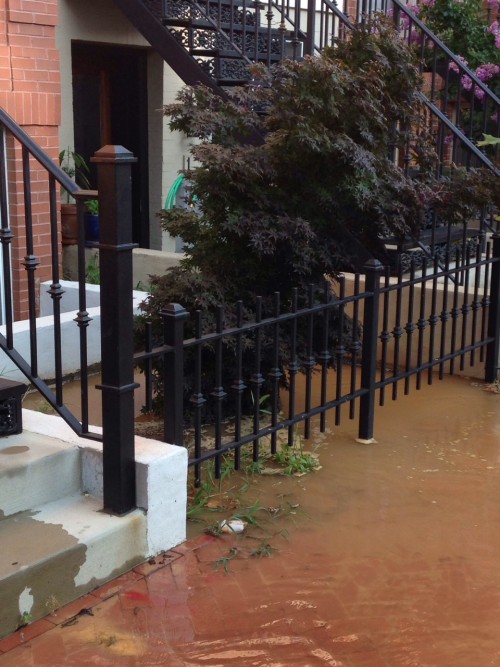 We live near Mt. Vernon Square on 4th Street NW and woke up to this today. DC Water was onsite to remove the water and should be here soon (hopefully) to repair and restore service. There is significant erosion under the brick sidewalk, so folks should be very careful walking by. If anyone can provide input on how to expedite the repair of our yard and the sidewalk so further erosion doesn’t occur, please let us know.” 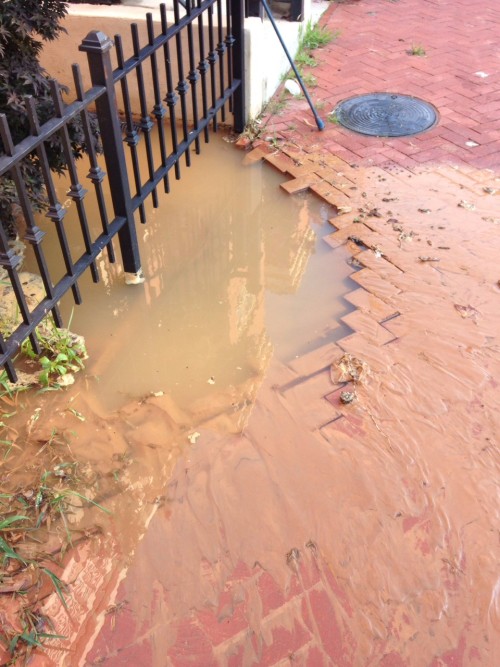 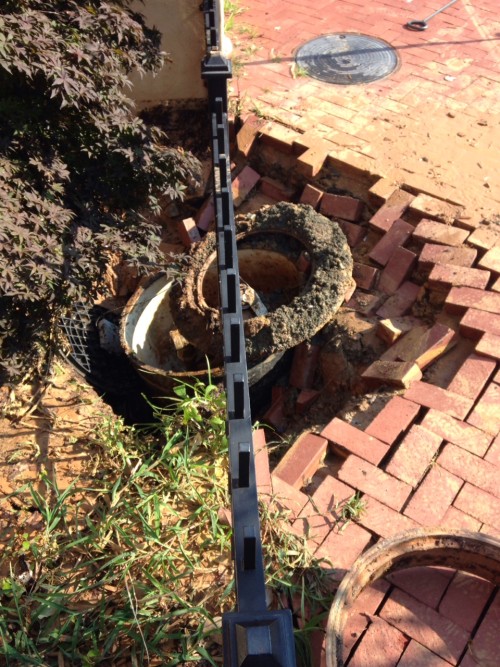