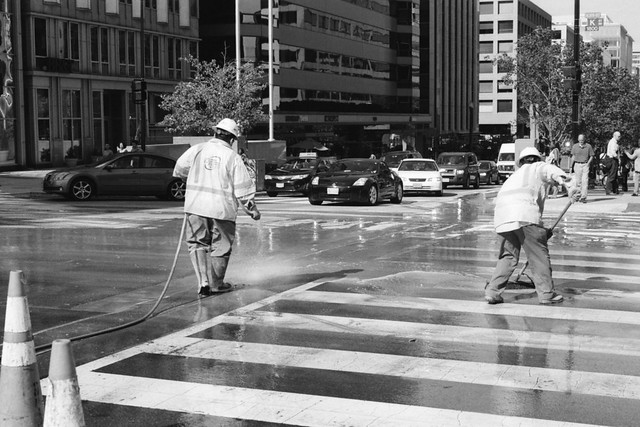 “As DC continues to grow and prosper, we need to reimagine our major roadways for the 21st century with infrastructure improvements that make public transportation more efficient and reliable for residents who rely on it,” said Mayor Bowser. “The K Street Transitway project will transform Downtown with dedicated bus lanes, protected bike lanes, redesigned sidewalks, and safer intersections to help keep DC moving and growing.”

Mayor Bowser’s Fiscal Year 2020 Budget proposal allocates $122.1 million for the K Street Transitway, a major redesign of K Street NW between 12th and 21st Streets NW, with infrastructure and safety improvements for all users of the roadway. The Transitway design will give buses their own lanes, separated from general traffic, install protected bike lanes, and include streetscape improvements that will improve the pedestrian and environmental conditions by installing new landscaping, pedestrian amenities, stormwater retention, and public art.

“Once complete, the K Street Transitway will make traveling through the corridor more efficient and safer for all users of the roadway moving through downtown,” said District Department of Transportation Director Jeff Marootian. “This project and all of our streetscape projects improve the engineering of our roads, ultimately advancing our safety and sustainability goals in the District.”

DDOT is updating the preliminary design of the project before beginning public meetings this summer to share information about the plans for the project and receive feedback from key stakeholders and the public.

$4.7 million to expand Vision Zero efforts, including $2.8 million to hire an additional 20 bike lane parking enforcement officers.
$16.1 million to make the zero-fare DC Circulator policy permanent and to expand the system’s routes into Ward 7.
$240 million for streetscape improvements, including a redesign of Dave Thomas Circle in Ward 5.”