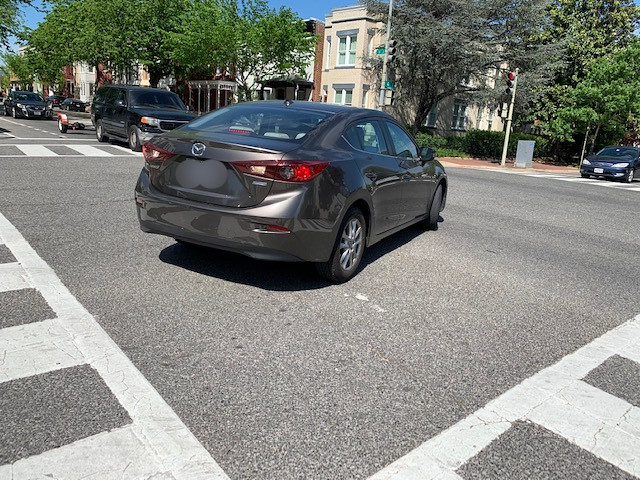 I fully accept that most adults look full-on ridiculous when riding any motorized scooter around town, and I also accept that many folks, especially visitors to our city, aren’t always the most safe or courteous.

That said, I had a total unexpected run-in with a car yesterday while scooting. I was standing at the red light at 8th and G, SE, facing the Marine Barracks. I’m aware that a car is slightly behind me. Light turns green, I proceed ahead, staying to the far right so the car can pass me, even pausing behind a parked car on the opposite side of the intersection so it can pass. It pulls up very close behind me, and I assume it’s to let the car coming the opposite direction get by. So I pull around the parked car and stop again in front of the parked car, again trying to let the driving car go past. And AGAIN, this car pulls up right behind me, even though there is plenty of room.

I get off the scooter and dude makes eye contact with me before swerving off. I realize he did it on purpose and mentally note his [DC] tag. Dude proceeds along G, and I pick up the pace and catch up to him at 11th and G. I knock on his window and ask if he was deliberately trying to mess with me. He rolls down his window and tells me to stop touching his car. I step back to take a photo of his car and tags and he tries to swerve around (while stopped at the red light) so I can’t see them (which clearly didn’t work). Light is still red when he pulls through the intersection.

I fully admit I wasn’t wearing a helmet, PoP, and I was worried I was going to crash or get hit BY ACCIDENT. But I certainly didn’t expect someone would DELIBERATELY try to run into me or just otherwise screw around, especially on a pretty quiet neighborhood street. I’m just a middle aged lady who was running late to pick her kid up from school.

Anyone else experienced this?”