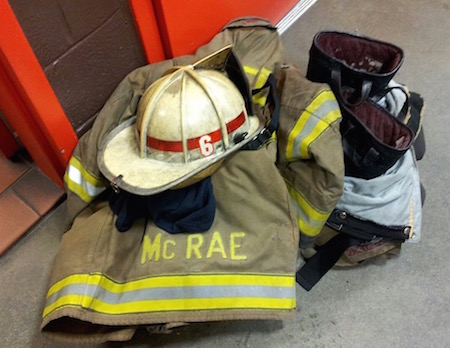 “May 6th, 2015 – Local 36 regrets to inform the membership of the line-of-duty death of Lt. Kevin McCrae, 6 Engine No.4 Platoon, while operating at a 2nd Alarm apartment fire at 1330 7th St. NW this morning. Our heartfelt sympathies go to Kevin’s wife, and daughter, and to his fellow members of 6 Engine & Truck 4. We are greatly diminished with Kevin’s passing.”

“On Wednesday May 6th, 2015 the District of Columbia Fire & EMS Department lost one of it’s best and bravest members – Lt. Kevin McRae on the fire ground at 1330 L St. NW.

Lt. McRae was a 24 year veteran of the department assigned to 6 Engine, No. 4 platoon. He leaves behind his wife Trell, and 5 children. There has been an overwhelming show of support for the family of Lt. McRae. We are asking that anyone who would like to help the family, make donations through the DC Fire & EMS Foundation in the name of Kevin. All donations go straight to the family, to assist with the expenses which occur as they go through this difficult period.

Any check or money orders should be made out to and mailed to the following: