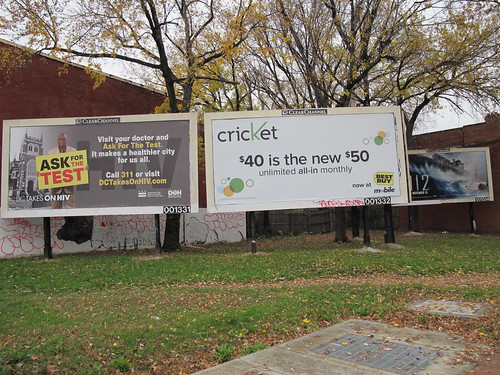 Last we heard a lawsuit was still going on and DC’s Department of Health had rented a spot in the meantime. On twitter I was  alerted to the following note from @DCRA:

They also link to a report from DCRA’s Web site:

“The District of Columbia imposed a permanent moratorium upon the issuance of any permits for the erection or construction of a “Special Sign.” Only 32 Special Signs are legally allowed to exist in the District. A Special Sign is not a billboard – at least in legal terms (see below for information on billboards). These legal Special Signs are similar to liquor licenses in that they can be bought and sold and can be moved from location to location within limited boundaries as defined the Act below. Continues after the jump.

Addresses for the 32 special signs along with current photos are located below.

The DC Construction Codes, specifically Title 12A, Section 3107*, govern the construction and permitting of all outdoor signs.

Under Section 3107.7.6.1, only those billboards in existence as of December 31, 1971* are authorized to remain in place, so long as they aren’t located on lots within 200 feet of a residential district, as defined by Zoning Regulations*. No changes in size or location are allowed for authorized billboards. If a billboard were to be demolished, unlike Special Signs, it could not be rebuilt or relocated to another site.

DCRA is been trying to piece together the history behind this moratorium. From what we’ve been able to gather, billboards were first constructed in the District in early 1931. Their appearance caused an outcry by residents concerned that billboards were a blight on the city’s aesthetics. By the end of 1931, the District’s government had banned the construction of any new billboards in the city. The only billboards that could remain were those contained on the “Authorized List of Billboards, Three-sheet Poster Boards, and Wall Signs,” dated November 30, 1931*, which appears to have been updated once a decade, with the last update being in 1971.

DCRA is currently creating an inventory of all legally authorized outdoor signs in the District. Once we have created an accurate inventory, we will be sending out inspectors to investigate any signs that are posted, but for which we do not have any permitting information on file. For those signs deemed to be illegal, we will issue notices to the owners of the property and the sign requiring the sign’s removal.

If you have questions about any other type of sign, such as billboards, building signs or construction signs, call the Permit Center at (202) 442-4589.

To apply to transfer the location or change the copy of a Special Sign, complete this form*.

If you suspect a billboard or other outdoor advertising sign is unauthorized, please email [email protected] and include the location, a photograph of the sign, and any details on the sign that indicate the sign’s owner. If you use Twitter or Facebook, you can also send us pictures via those social networks.”