Support us!
Search
Capitol Hill, Politics, Transit, What the Helen of Troy is This 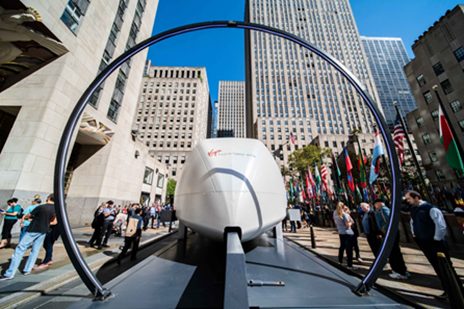 “Virgin Hyperloop One (VHO) will zoom into Washington D.C. on Wednesday, stopping outside the United States Capitol with its XP-1 test pod as part of its national road show to introduce the promise of hyperloop technology to people across the United States, and give them the chance to see it up close.

On May 11, 2017, XP-1 completed the world’s first full-system hyperloop test – what VHO calls its “Kitty Hawk” moment. This was the first time any company had integrated all of the components of a hyperloop including a highly-efficient motor, power electronics, magnetic levitation, vacuum pumping systems, and an aerodynamic vehicle as a single unified system. During testing, XP-1 set the full-scale hyperloop speed record of 240 miles per hour on just 550 yards of track. It is that test pod that will be in Washington D.C. on Wednesday.

VHO has new momentum on Capitol Hill and across the country; The United States House of Representatives recently voted to fully fund USDOT Secretary Elaine Chao’s Non-Traditional and Emerging Transportation Technology (NETT) Council to explore the regulation of hyperloop technology; nine states across the country are now vying to become the first in the nation with a hyperloop route: Missouri, Texas, Colorado, Ohio, North Carolina, Pennsylvania, Washington, Illinois, Oregon, and Nevada, where the VHO test track is based.

About Virgin Hyperloop One

Virgin Hyperloop One is the only company in the world that has successfully tested its hyperloop technology at scale, launching the first new mode of mass transportation in over 100 years. The company successfully operated a full-scale hyperloop vehicle using electric propulsion and electromagnetic levitation under near-vacuum conditions, realizing a fundamentally new form of transportation that is faster, safer, cheaper, and more sustainable than existing modes. The company is now working with governments, partners, and investors around the world to make hyperloop a reality in years, not decades. They currently have projects underway in Missouri, Texas, Colorado, the Midwest, India, and the UAE. Learn more about Virgin Hyperloop One’s technology, vision, and ongoing projects here.”