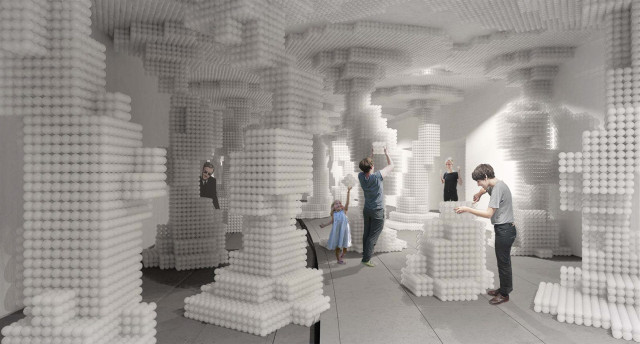 “We are thrilled to announce that Raise/Raze by Hou de Sousa has won Re-Ball!, the international design competition for a site-specific installation that will be the Dupont Underground’s debut event. Hou de Sousa is a dynamic, award-winning architecture and design studio based in New York City.

Raise/Raze transforms the 650,000 translucent plastic balls from the National Building Museum’s Beach exhibit into an assembly block system that is fully reconfigurable. While the installation will open with pre-assembled “zones,” visitors will be free to alter the installation to create their own objects and spaces.

“We were inspired by the competition brief’s emphasis on repurposing a material,” the design team explained. “We proposed a re-usable system, rather than a specific form or design, resulting in a dynamic and direct relationship between creation and destruction. Raise/Raze is like sand in a massive sandbox; it allows its users to alter their surroundings with ease.”

“The jury was particularly struck by the interactive potential of Hou de Sousa’s proposal,” said Craig Cook, an architect with the design studio Archotus and director of Re-Ball!. “We were impressed with how their design translated a material concept into a social concept. Visitors will activate the installation and implicitly engage in a democratic process: some build, some destroy, some work together, some work alone. It is a piece that is especially relevant to Washington.”

“Raise/Raze is the first ever art installation in the old station and the first time it has been opened up for use in two decades,” said Philippa Hughes, Dupont Underground board member. “The exhibition will establish Dupont Underground as a place for world-class community engagement and creative exchange through the arts. It’s not what anyone expects to see in D.C. and we’re happy about that!”

Hou de Sousa is the design practice of Jia Min Nancy Hou and Josh de Sousa, who began collaborating in 2010, shortly after graduating from the Harvard Graduate School of Design. Recent awards and honors include: Finalist for the 2015 City of Dreams Competition, a Notable Entry in the 2015 Socrates Park Folly Competition, and the Winning Restaurant Design for the IIDA’s 2015 Best Interiors of Latin America and the Caribbean Competition.

Due to the interactive nature of the installation, visiting Re-Ball! will be in small groups by reservation only. To reserve admission for the installation exhibition, Dupont Underground encourages advance registration through their Indiegogo crowdfunding campaign Open These Doors!. Donors at the $25 level receive priority when making a reservation during the exhibition, which will run April 30 – June 1, 2016.

The Re-Ball! design competition call-for-entries closed on March 4th with over 150 registrants, which included 92 proposals from 19 different countries. All submissions can be viewed at re-ball.org.

Thank you for being a part of Dupont Underground’s community, we look forward to seeing you at Re-Ball!
Craig Cook
Director of Arts Programming