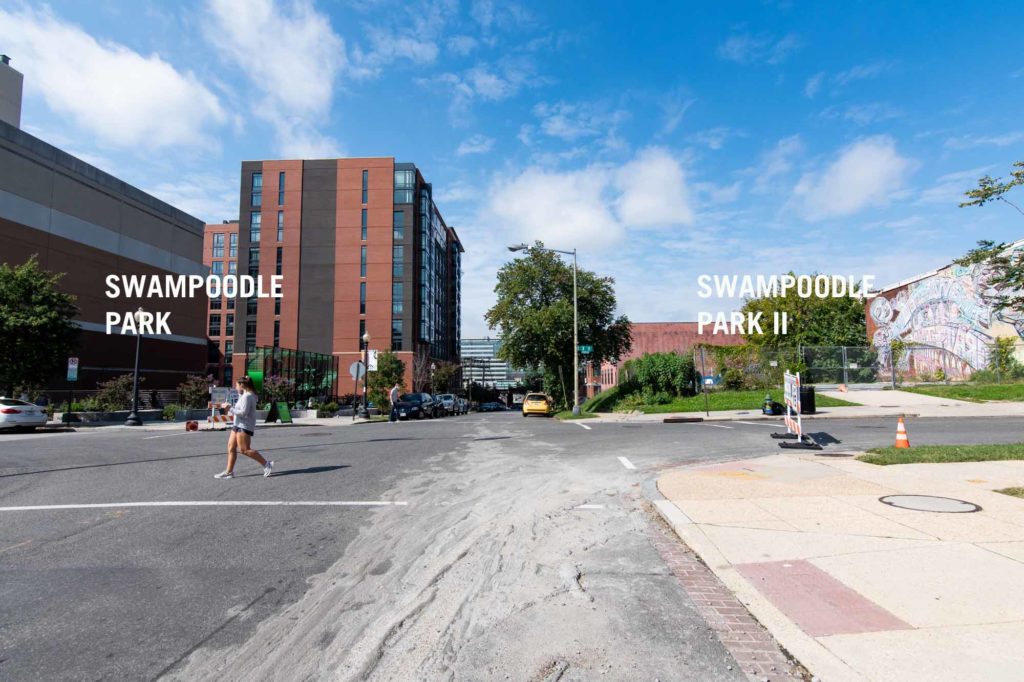 “The NoMa Parks Foundation, an affiliate of the NoMa Business Improvement District (BID), announced today that it has acquired the parcel at 1100 Third Street NE, at the corner of Third and L Streets NE. The now-vacant property, which consists of 5,800 square feet of land, will be turned into a public park owned by the District of Columbia government.

“This parcel is the long lost twin sister to the adjacent, award-winning Swampoodle Park, which opened in 2018, and has become a neighborhood favorite for both people and pets,” said Robin-Eve Jasper, President of the NoMa Parks Foundation. “We look forward to working with the community and our DC government agency partners to deliver the perfect bookend to complement Swampoodle Park and bring yet another remarkable new park to NoMa for the community to share and enjoy for years to come.”

The acquisition is the fourth such land acquisition by the NoMa Parks Foundation since the D.C. Council in 2014 provided it with $50 million to identify opportunities to acquire land, design and create parks for the formerly park-deficient NoMa neighborhood.

The NoMa neighborhood had no publicly accessible park spaces in 2012, leading to the public-private partnership between the NoMa Parks Foundation and the DC government to address the absence of parks and remedy this deficiency. Over the last eight years, the NoMa Parks Foundation has delivered four parks – Alethia Tanner Park (March 2020); Lightweave Underpass Art Park (2019); Rain Underpass Art Park (2018); and Swampoodle Park (2018). Additionally, the NoMa Parks Foundation has partnered with the District government to design three new open space parcels at the intersection of New York and Florida Avenues NE (“Virtual Circle”), worked with developers to assure the availability of publicly accessible private spaces like the NoMa Meander, and established public space design guidelines to assure that private owners provide park-like public spaces when developing new projects. Additional public space improvements are coming to the K Street underpass, the NoMa Meander, and at several other small sites throughout NoMa.

“The purchase of this parcel marks the final acquisition in the remarkable story of the NoMa Parks Foundation’s success in fulfilling its mission to establish welcoming, sustainable, beautiful spaces where people can play, refresh and connect in NoMa,” said Sandy Wilkes, NoMa Parks Foundation Board Chair. “The progress made in establishing much needed green and public spaces throughout the NoMa neighborhood has only been possible through collaboration with our committed and visionary partners including Mayor Bowser, the Department of General Services, the Department of Parks and Recreation, the District Department of Transportation, the Commission on Arts and Humanities, and the DC Office of Planning.”

“It is extremely rewarding to know that more greenspace will be coming to this area of NoMa that will help residents and visitors thrive, said Keith A. Anderson, Director of the Department of General Services. “DGS is excited to be able to deliver again on this network of parks to the NoMa community and the District on behalf of Mayor Bowser. We are proud to be part of this public-private partnership with the NoMa Parks Foundation, the Department of Parks and Recreation and the community.”