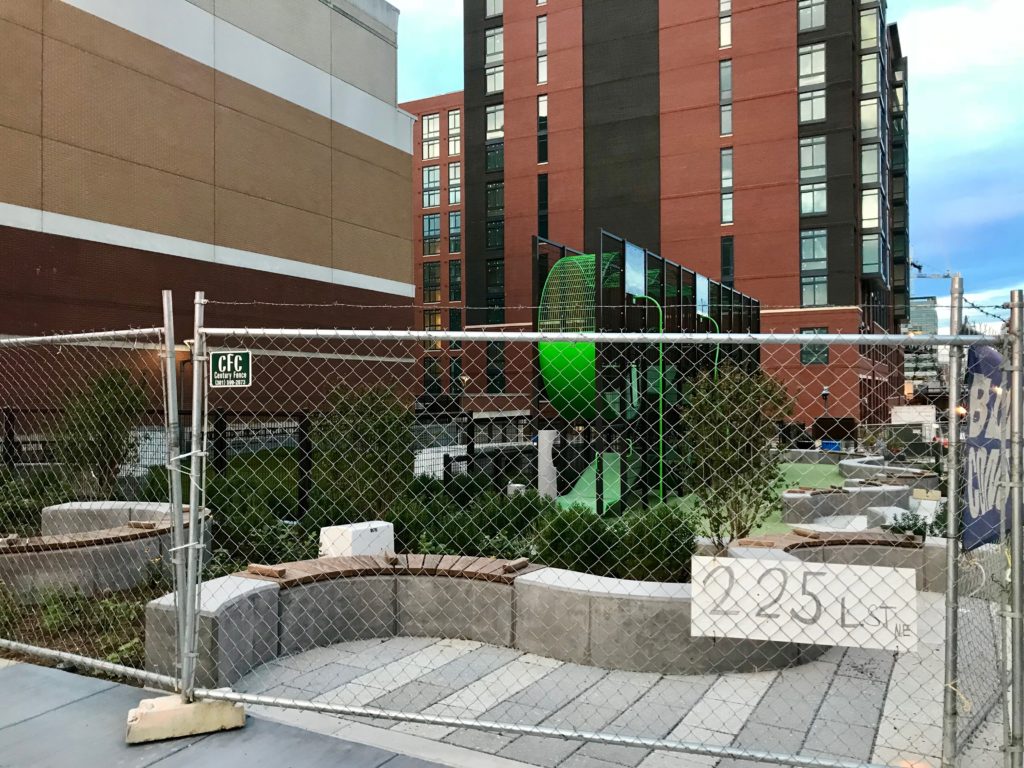 Huzzah!! I’ve been having lots of folks asking for updates on this.

“Calling all kids and their canine friends! The NoMa Parks Foundation will celebrate the completion of Swampoodle Park with an inaugural Wallholla climb and dog procession on the morning of Saturday, November 17, at 11:00 a.m. Located at the intersection of 3rd and L streets NE, the 8,000-plus-square-foot park — previously a vacant lot for which condominiums were once planned — offers a play structure for children, a dedicated space for dogs, and public seating, as well as trees and other plantings. Swampoodle Park was designed by District landscape architecture firm Lee and Associates, with substantial input from the NoMa community provided through multiple public meetings and surveys.

“The NoMa Parks Foundation acquired a 5,200-square-foot parcel in October 2015 knowing that we could add significant adjacent public space,” says Robin-Eve Jasper, president of the Foundation. “Our goal was to meet as many of the needs expressed by the community as possible, but only if we could do so in a way that would be beautiful and delight park visitors. Lee and Associates’ design for Swampoodle Park does just that. It’s amazing that they could incorporate the elements the community and the Foundation dreamed of into a single, well-organized, and fun space.”

Per the NoMa Parks Foundation’s public-private partnership with the D.C. Government, the 3rd and L NE site was procured and developed by the Foundation through city funds and is owned by the District, within the inventory of public spaces managed by the Department of Parks and Recreation (DPR). It is the first new property added to DPR’s inventory in NoMa. “Swampoodle Park furthers Mayor Muriel Bowser’s mission of providing health and wellness through universal access to meaningful green spaces for all D.C. residents and their dogs,” says Delano Hunter, Interim Director of DPR. “We are thrilled that the city-provided funds have culminated in this spectacular and innovative park.” The park is the first DPR property to contain a Wallholla, a unique vertical play structure for children created by Dutch design firm Carve. Including Swampoodle Park, there are six Wallhollas throughout North America.

The District also requires that any dog parks that are developed must be maintained by a local “friends of” organization. Friends of NoMa Dogs (FOND), a nonprofit founded by NoMa dog owners who actively advocated for a dedicated dog park and had used the 3rd and L lot for years prior to Swampoodle Park’s construction, will fulfill that requirement. “We’re excited this day is finally here. No doubt, our dogs will be thrilled too,” says the organization in a statement. “Our community, which has so many dog owners and dog lovers, came together, identified the need for a dog park, and the NoMa Parks Foundation not only heard us, but it built us a beautiful space that will be enjoyed and cherished for years to come.”

Swampoodle Park is named for the late-19th-century, largely Irish neighborhood that once defined the area between the park’s location, New Jersey Avenue to the west, and Massachusetts Avenue to the south. (The moniker referred to the fact that the Tiber Creek, which ran openly through the area but is now buried beneath city streets, often flooded, leaving puddles everywhere.) The Swampoodle neighborhood essentially vanished after the construction of Union Station and its elevated train tracks in 1907. After crowdsourcing more than 100 possible names for the park and then putting three great options to a public vote, the NoMa Parks Foundation announced in December 2017 that “Swampoodle Park” was the community’s preferred name. More than 1,500 votes were cast in an online poll, with 67% of respondents selecting the name, which was made official by the D.C. Government in early 2018.

With Swampoodle Park complete, the NoMa Parks Foundation will soon begin construction on its largest park project in late 2018. When it is complete in about a year, “Alethia Tanner Park” — a 2.5-acre site between Harry Thomas Way NE and the Metropolitan Branch Trail north of New York Avenue NE — will include a large green lawn, a children’s playground and dedicated dog park, and more. In 2017, “Alethia Tanner Park,” then known as “NoMa Green,” received the Best Community Impact Award from the Washington Business Journal at the publication’s Best Real Estate Deals event. The park’s design is by Nelson Byrd Woltz, a landscape architecture firm based in Charlottesville, Va., and New York City.

In addition, the Foundation is creating “art parks” in NoMa’s railway underpasses with beautiful, compelling light installations that were selected through an international design competition. Rain, by Thurlow Small Architecture and NIO architecten, opened in the M Street NE underpass in October 2018. In the L Street NE underpass, Lightweave, by Future Cities Lab, will begin construction in late November 2018 and is expected to open within three to four months.”