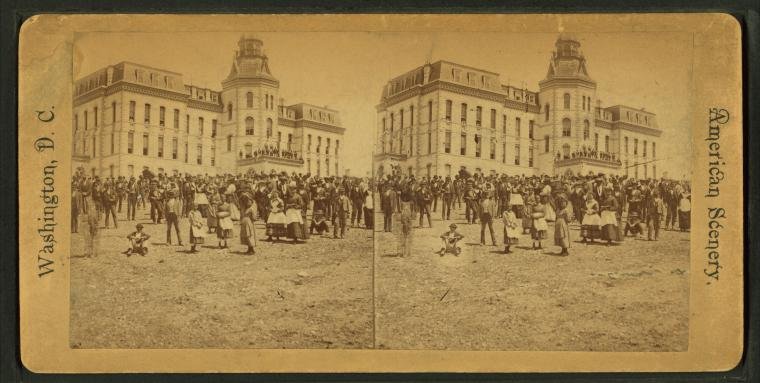 The history of Frederick Douglass and Howard University, where he served on the Board of Trustees for a quarter-century, has been largely lost and overlooked within the history of both Reconstruction Washington, D.C. and the mythic public biography of Douglass.

Join author of the definitive book, Frederick Douglass in Washington, D.C.: The Lion of Anacostia (The History Press, 2012), for a unique walk back in time to discover the sacred history of Howard University, Shaw and the 7th Street Turnpike.

Historic topics include formation of Howard University, the first generation of co-ed and integrated graduates, faculty including John Mercer Langston, Richard T. Greener as well as the local and national political support from Senators to Presidents.

Tour will begin: outside at the historic home of Senator Blanche K. Bruce, 909 M Street NW

Muller has presented widely throughout the DC-Baltimore metropolitan area at venues including the Library of Congress, Newseum, Politics and Prose, American Library in Paris and local universities. He is currently working on a book about the lost history of Frederick Douglass on Maryland’s Eastern Shore.

Muller has been featured on C-SPAN’s BookTV and C-SPAN’s American History TV, as well as in the pages of the Washington Post, Washington Informer (where he has been a contributor for several years) Star Democrat and the airwaves of NBC4, WPFW 89.3 FM, WYPR (Baltimore) and Delmarva Pubic Radio.

As a guest on the Kojo Nnamdi Show on WAMU 88.5 FM in July 2018 Muller joined Prof. K. McClarin of Howard University to speak about the important contributions to local Washington, D.C. Frederick Douglass made, including service to Howard University.”

Next
“You mess with my bagels? This is war.”