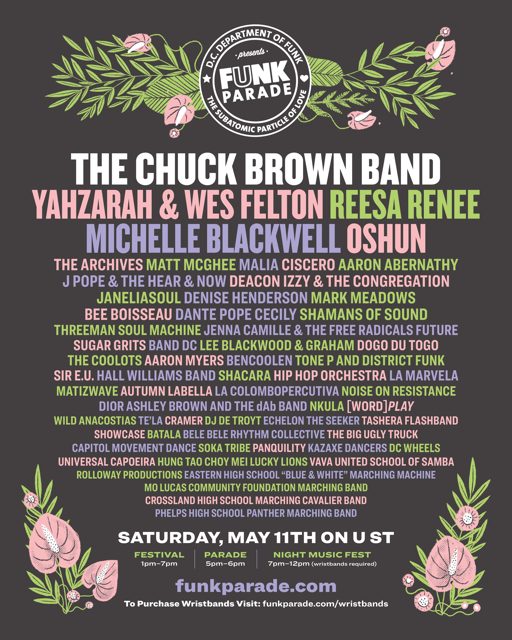 “Funk Parade season is upon us.  The official theme for the entire 2019 Festival is “Keepin’ The Funk Alive.”  The theme is a celebration of the restored vision and commitment of The MusicianShip to grow the festival into the future, building a bridge to connect our city’s youngest up-and-coming artists and musicians, to DC’s musical history, culture, and its most talented musicians.  Funk Parade 2019 is happening Saturday May 11th. The Festival starts at 1:00pm, the Parade kicks off at 5:00pm and the Night Music Festival begins at 7:00pm.

Certain venues will be providing various discounts and perks for wristband holders.  Check back on the website and the wristband link in a couple of weeks to find out about these specials.

The wristband program is designed to create a more sustainable future for Funk Parade, with a model that can continue to pay artists fairly and sustain the music education mission of The MusicianShip.

Note: The Night Music Festival Wristband does not include entry to the Featured Showcase.

How To Get Your Wristbands

To redeem your pre-purchased wristbands, visit the Funk Parade Volunteer and Merch Tents during the hours of 1:00pm and 7:00pm on Saturday May 11th.

Featured Showcase Wristbands can be redeemed upon entry to the Prince Hall Lodge, 1000 U St NW Washington DC, starting at 7:00pm on Saturday May 11th.

For the first time ever Funk Parade will will be hosting a conference. On the morning of May 11th, Funk Parade supporters will have an opportunity to hear from influencers and subject matter experts on a myriad of topics, ranging from music, to social impact, to local happenings. Stay tuned for a line up of this year’s Funk Parade conference speakers.