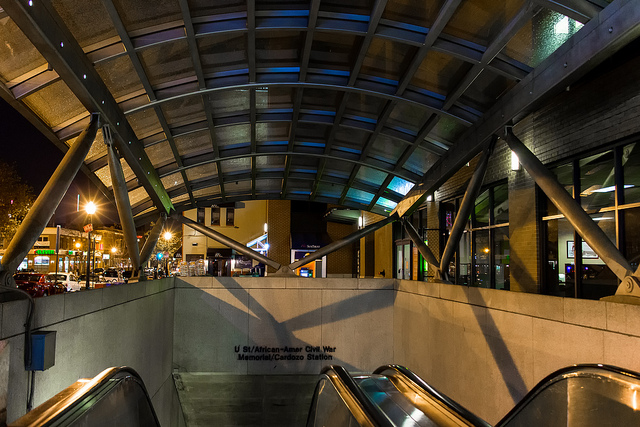 “Metro today announced the completion of a major escalator replacement project at U Street Station. On Friday, the 13th Street entrance will reopen with two brand-new escalators in service.

The project, originally scheduled to take six months was completed a month ahead of schedule.

Metro and its contractor, KONE, expedited construction by temporarily closing the 13th Street entrance to allow work on the two adjacent escalators at the same time.
As a result of Metro’s aggressive efforts to replace and rehabilitate escalators to like-new conditions, escalator availability is at an all-time high. At any given time, an average of 587 of Metro’s 618 escalators (95%) are in service during operating hours. The measure includes escalators taken out of service for inspection, repair, rehabilitation or replacement projects, as well as escalators that are stationary because an adjacent unit is out of service.

With the completion of the two U Street escalators, Metro has now replaced 80 units since 2011. Another 153 escalators have been rehabilitated to new condition with all new parts, including motors, steps, handrails, safety devices and electrical systems.

Work will begin early next year to rehabilitate the east entrance escalators at U Street Station located at 10th Street near the African-American Civil War Memorial.

Metro owns, operates and maintains the largest fleet of escalators in North America and is investing $151 million dollars to replace more than 130 escalators by the end of the decade.”