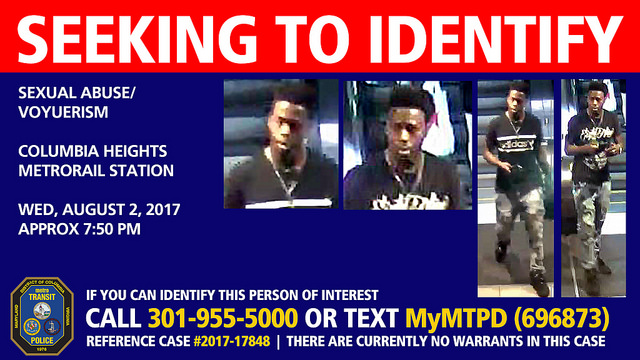 “Metro Transit Police detectives are seeking the public’s assistance to identify a person of interest in multiple incidents of voyeurism (upskirting) and at least one reported sexual abuse incident that occurred at Columbia Heights Metrorail Station on Wednesday evening.

Yesterday afternoon, an adult female contacted Transit Police via Metro’s online harassment reporting system. The victim reported that she was exiting Columbia Heights Station using the ascending escalator at approximately 7:40 p.m. Wednesday when she felt a hand up her skirt. The victim left the area, while the suspect returned into the station.

Overnight, using information provided by the victim, investigators were able to find the incident on video and obtain images of the suspect. The review of video footage revealed that the suspect actually placed a cell phone up the victim’s skirt.

Disturbingly, the investigation has also revealed that there are several additional female victims who are likely unaware that they were “upskirted” by the suspect.

Following these developments, MTPD immediately added plain clothes officers at Columbia Heights and other stations to attempt to locate the suspect and the other victims. Those investigative efforts will continue while MTPD seeks public assistance.”

more stories
Previous
DC Open House List for This Weekend
Next
“Over the course of the construction of the first street tunnel, our home started to exhibit cracks in the dry wall that were indicative of foundation damage.”