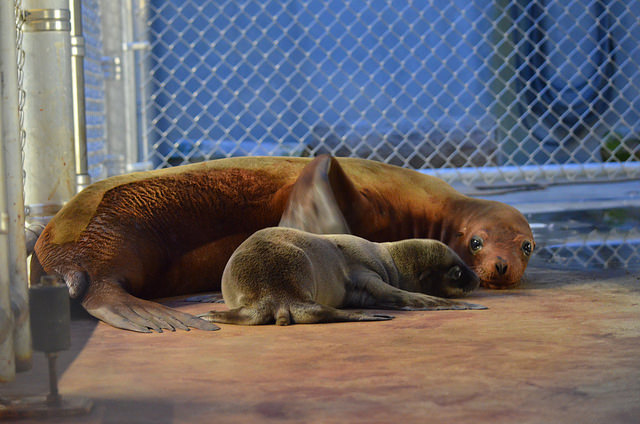 “For the first time in 32 years, the Smithsonian’s National Zoo’s American Trail team celebrated the arrival of a sea lion pup, born June 26 to 11-year-old mother Calli. Keepers watched the birth in an off-exhibit area and continue to closely monitor the pup, which appears to be nursing, moving and vocalizing well. Animal care staff are allowing Calli and pup time to bond, so it may be some time before keepers can determine the pup’s sex. This pup is the second for Calli and the first for 8-year-old father, Jetty.

Keepers suspected that Calli was pregnant based on her physical changes, appetite and weight gain, among other cues. Keepers have trained the sea lions to voluntarily participate in radiographs and ultrasounds with veterinarians present as part of their routine medical care. An April 20 radiograph confirmed Calli was pregnant, and animal care staff have been conducting intermittent ultrasounds and tracking the pup’s development. The Zoo announced Calli’s pregnancy May 31 through a broadcast via Facebook Live of her ultrasound; it will continue to provide updates on the sea lions through Facebook, Twitter and Instagram.

The Zoo received a recommendation to breed Calli and Jetty from the Association of Zoos and Aquariums’ Species Survival Plan (SSP). An SSP matches individual animals across the country for breeding in order to maintain a healthy, genetically diverse and self-sustaining population. Zoo visitors can see Jetty, Summer and Sidney daily at American Trail.

Native to the West Coast of North America, California sea lions range from Baja, Mexico, to Vancouver Island, British Columbia. Though they were once hunted for their skin, the International Union for Conservation of Nature now classifies them as a species of least concern.”