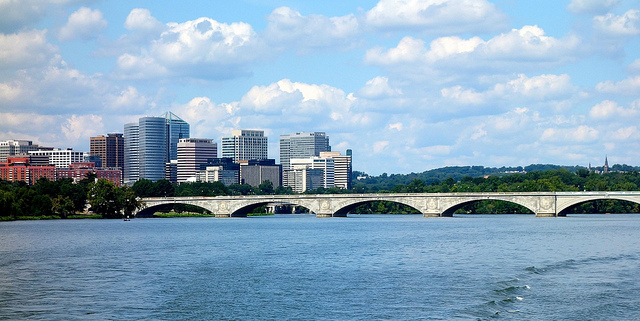 I want people to be aware of what I experienced Friday so they can keep an eye out. Around 6:15 – 6:30 I was jogging northbound on the Mt. Vernon trail along the Potomac near Memorial Bridge. An Hispanic/maybe Middle Eastern man, medium skinned with trimmed black hair, stubbly facial hair, 40’s, about 5’6,” with black pants and a burgundy sweater/windbreaker with a black messenger bag that said something like “Community Health,” with an accent, rode past me slowly on a bike, leering. He turned 3 times after he passed me to stare before finally going on. Creepy, but he was moving away from me, and I told myself he must have been looking at something else. I moved on and turned near Arlington Cemetery to cross Memorial Bridge eastbound into DC when creeper guy disappeared along the trail going north toward Rosslyn.

About 15 minutes later, I was eastbound across the bridge still on the Arlington side, when I noticed the shadow of a cyclist approaching me from behind on my left. It was creeper guy. He made a reach for me as he passed (I pulled away so no contact) and then said some cat-callish thing as he slowed and turned on his bike to cut me off. I realized this man must have doubled back to follow me, that he had targeted me, and suddenly I was very scared. I tried to get away while shouting at him repeatedly to get the fuck away, and even threw some water from my bottle at him in hopes of getting him to back off. He yelled back, called me a fucking bitch, and started to get off his bike. Thankfully, two walkers stepped in (very brave, they literally stepped between me and him). Creeper guy took off on his bike across the bridge eastbound toward DC.

After he left I worried that he would still follow me, even back to my home, so I ran directly to the US Park Police station nearby, looking over my shoulder the whole way. I will give some “props to the cops” because they took me seriously, arranged for me to get home and be sure I wasn’t followed, and went out looking for the guy.

I have jogged daily for 15 years, and while I have had stares and catcalls and men taking pictures of me and men exposing themselves (ugh), I’ve never been threatened like this. I am scared to go back on the Mt. Vernon Trail or Memorial Bridge, areas I thought of before as safe and scenic, for fear of seeing this guy again.”