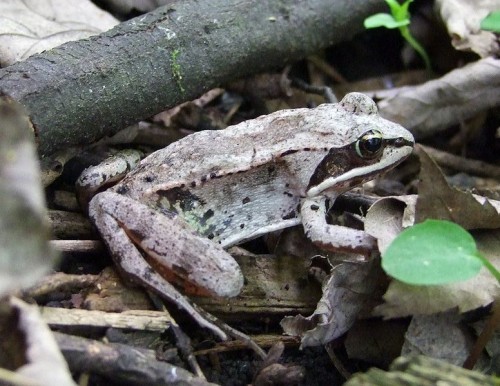 Photo via Wikipedia by W-van

For wood frogs, our recent warmer-than-usual temperatures must be existentially boring. These pretty little brown frogs are widespread along much of the East Coast and Midwest, across a swath of Canada into Alaska. They’re the only amphibians that live north of the Arctic Circle. In winter, wood frogs hibernate near the forest floor, digging under leaves or shallow layers of soil, where they are still exposed to freezing air temperatures. When the mercury drops, they perform a trick we still don’t entirely understand: freezing almost solid. The frogs’ bodies produce cryoprotectant substances including glucose, which protects their cells from being damaged by ice crystals. As they grow colder, the water in their body cavities turns to ice; their hearts stops beating; and even the lenses of their eyes freeze and turn white. Eventually, more than half of the water in the frog’s body can be solid ice. Wood frogs can freeze and thaw multiple times in a season, and we know they can survive at least four weeks of being continuously frozen.

In the DC area, wood frogs mate in March and lay their eggs in vernal ponds, temporary pools that appear during the spring thaw. At only about two inches long, they’re hard to spot – try listening instead. Rainy nights are the best time to hear them chorusing en masse, with distinctive calls that sound, weirdly, a little like the quacking of ducks.