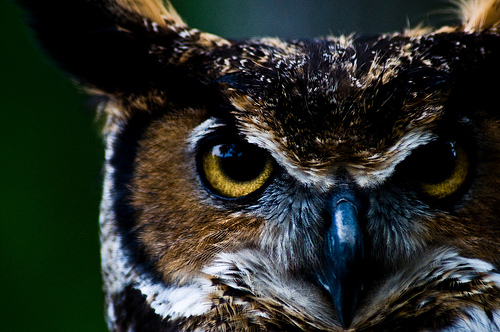 The biggest owls in DC are nesting right now, making it the perfect time to hear them. Great Horned Owls are at their noisiest in late winter, hooting back and forth to each other as they try to find a mate. Once they pair off, the owls will build nests inside hollow trees, or take over abandoned hawk nests. Over the next few months, they’ll raise two or three owlets, feeding them with selections from the city’s rat population and other choice edibles.

The Great Horned call is a classic “who who whooo, who, who,” though they can also bark and (unnervingly) shriek. Despite their size – with wingspans of up to four feet – you’re more likely to hear an owl than to see one. If you’re lucky, you could spot one at twilight, flying over fields close to the edge of the woods.

Where and how to find them:

Great Horned Owls are residents of Rock Creek and the National Arboretum, and have been seen in other parts of town. Listen for them calling between dusk and midnight, or just before dawn. During the daytime, sometimes crows will ‘mob’ an owl to drive it off. If you hear a group of crows making noise, chances are good that they’re heckling an owl, and you might catch a glimpse of it flying away.

(You’ll probably never come face to face with an owl. Just in case, keep in mind that owls and their nests are protected under federal law. Enjoy from a distance.)