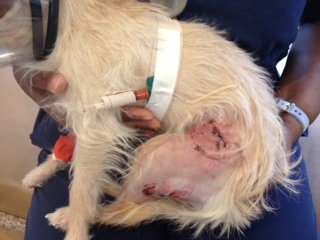 A friend mentioned I should tell you about a recent pit bull attack that happened to my rescue dog. Please post so other people may watch out for this guy and his dogs. They are clearly dangerous and I am concerned next time they will kill a dog, or worse, bit a child. This guy seemed sketchy and I got the vibe this might be a regular thing.

Since having my dog for 5 months, I worked very hard to socialize him. I made sure he was around other dogs, including pit bulls, I am not biased against them and know they can be good dogs. He was abused and rescued from a high kill shelter in SC and this attack has set us back to square one in terms of his fear and nervousness outside. I was walking him on a leash in Kalorama park (this isn’t a dog park) Fri evening at 9:30. We came across a young white boy in a hoodie sitting on a bench with his two aggressive pit bulls. One of the dogs was white and the other was grey. they were both wearing large, black leather, metal studded collars. Both pit bulls were very aggressive as we approached so I told the young guy my dog was a rescue and was nervous around bigger dogs and tried to walk around them. By that point it was too late, the grey dog was not on a leash and lunged to attack my dog. I pulled my dog into the air by his leash, and that is why I think the pit bull didn’t kill him.

The pit bull’s owner didn’t seem alarmed, didn’t say anything, got up from the bench, not in a hurry, and somehow got ahold of his dog, who let my dog go and my dog took off running. Thankfully he is still alive, and got off “lucky”. The vet bill was $600, I took of after my dog and haven’t seen the guy or his dogs. He never said anything to me, apologized or anything. A friend has mentioned she has seen this guy around Adams Morgan and the dogs usually have muzzles on. This night the grey dog was not on a leash. Attached is a picture of my dog,I hope this will help other people to save the trauma and the expense. If people see this guy around, they should call animal control at 311. A report has been filed and they are patrolling the neighborhood for this guy and the dogs.

The city has asked if anyone sees this guy or his dogs to call 202-576-6664 and press option 1, they are patrolling the area for the dogs. They want to get this dog off the street before he kills another dog or harms a person.