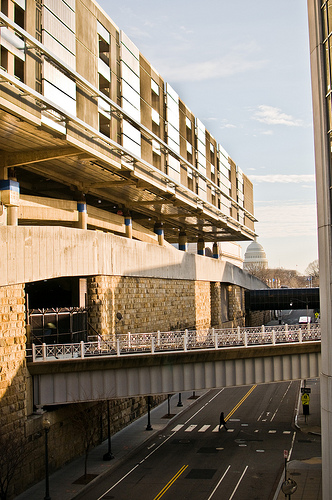 The following was written by Ben Ball. Ben is a transportation nerd in his spare time and lives in LeDroit Park.

Crossing the northern part of downtown is a hassle.  Jammed buses, increasing traffic, and maxed out Metro stations are already part of daily life for those who live or work in the area.  The District’s transportation planners realize this, and are already working on new transit options for the long corridor between Union Station and Georgetown.

DDOT held the first in a series of public meetings to lay out options, ask for feedback, and ultimately make a decision on how to proceed.  To a certain extent, DDOT has already tipped its hand – the choice is really between an expansion of the forthcoming H St streetcar line and the creation of a “bus rapid transit” system.  Given the investment the District has already made in streetcars, this is likely the pre-ordained choice.  In order to satisfy Federal funding guidelines, however, DDOT has to officially consider other options, including the possibility of not building anything.

Where would this new transit option go?  Between Mt Vernon Square and Washington Circle, there is really only one viable route.  K St is not only a straight shot through the area, but it also has the small frontage roads which can easily be repurposed into a streetcar line or a dedicated space for buses.  M St is theoretically another option, but there’s the whole problem of Thomas Circle to deal with, and the street width doesn’t allow for much creativity.

On the Union Station end, things are far less certain.  If the streetcar line is extended westward from its current terminus at H and 2nd NE, how will it connect with Union Station?  According to DDOT, two options have already been ruled out – running the line down the east side of the station (down 2nd St NE), and a connection within the station itself.  That leaves three choices:  a stop at First St NE and Massachusetts (across the street from the Union Station Metro station), a stop one block away at North Capitol and Massachusetts (on the west side of the Postal Museum), or a stop at First and H St NE (on the north side of the bus parking garage).  The location will ultimately hinge on how a future streetcar would get from H St NE to Mt Vernon square – on H St, on Massachusetts Avenue, or some other way.

On the Georgetown end of the corridor, planners are grappling with where the new line will go and where it will end.  M St is narrow and already clogged with traffic – not ideal for either streetcars or buses.  K St is wider, but could also be limiting:  if you want to extend the streetcar line up to Georgetown University, the steep roads which rise up from the Potomac present a serious engineering problem.

Wait, didn’t Metro just announce that they eventually want to build a subway line along this very same route?  Well, yes.  DDOT sees the two plans as complimentary – one will be designed for “long haul” travel, the other for shorter trips across town.  In the end, there is plenty of demand for both in the long term.  A new Metro line is also decades in the future, if it gets built at all.  DDOT is coordinating with Metro on how their two plans might all fit together, and will continue to do so.

What happens now?  There will be two more public meetings – one in April, and one in May –  to discuss initial findings and narrow down the options.  In May or June, the final recommendation will be released.  Having satisfied the initial need to consider all the options, DDOT would then be cleared to conduct environmental impact studies – the first step towards making this new transit corridor a reality.

Want to learn more?  Want to give your two cents?  Public comments are being gathered online here.