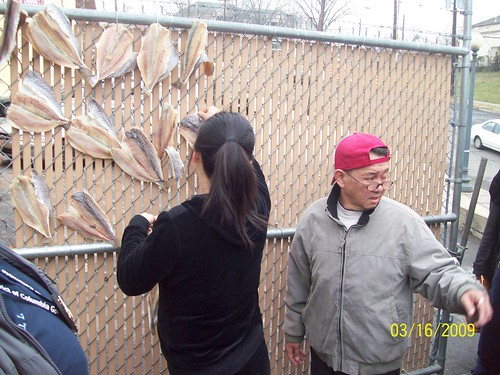 Wow, this could be one of the more disturbing “Dear PoPs” I’ve ever received. From the photo above, that a reader sent, it looks like they were drying fish on the back alley fence. Insane. Fortunately you can see a DC health inspector’s badge to the very left of the photo. The reader writes:

“I checked into this on DC.gov and found out that this carryout and several others were busted recently due to poor sanitary conditions, findings of rat feces, improper food handling/storing/disposal of meat, etc. This is insane and unacceptable. We live in a unique city but yet we have to deal with such sublevel food finds in our neighborhoods.

Please share this on your blog so that readers may know to BE AWARE of where they chose to patron or eat; especially when it comes to some of the neighborhood carryouts. You could be getting more than unusual culinary delights in your order of Pork Yat or Kung Pao Chicken!!

These are picture of frozen fish being thawed on back of a fence of a neighborhood carry out! I am sure it is the fish used in fish sub sandwiches or platters.

Here’s the link from DC.gov:

I think the photo is from a bust of New China Inc. Chinese &American Food @ 18 Montana Ave. NE.”

Brutal. But I’ve checked that link before and often there are “proper” restaurants on there as well. It’s kinda like the crime reports for me, sometimes I wish I didn’t know. Don’t get me wrong, I’m glad they’ve been busted and all. But what happens if my Taco Bell gets one of these reports…