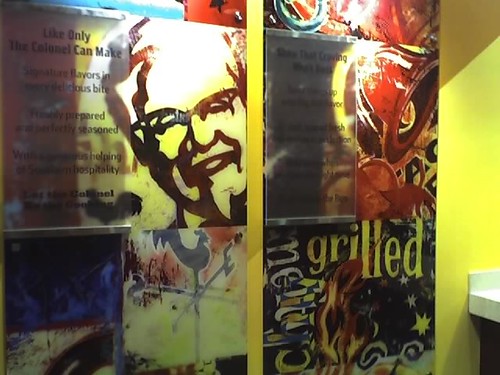 My prayers have been answered. Hallelujah. Hallelujah, that is one weird word to type out, but an apt one for how I am feeling. The Taco Bell/KFC has reopened on 14th Street just south of U Street. Thanks to a reader for alerting me. You will not be dissapointed when you go back. The basic layout is the same but the look is rather futuristic. It feels like at least 2009 in there now. The chairs are a nice silver and some of the walls are painted a nice shade of fire engine red. To top it off the staff now sport fresh new red shirts with sweet racing stripes down the arm. All in all a much cleaner feeling than before.

Now for the food. I started with a beef meximelt. At first I was very frightened because the meximelt was not on the menu but, remember this tip, just ask for one and they’ll make you one even though it’s not written on the menu. I had a fountain Dr. Pepper which nicely complimented the hot sauce on the meximelt. For the second course I had another meximelt. Why mess with perfection right? To top it all off I had a Nachos Supreme. It was perfect. The cheese to meat to beans to sour cream ratio was spectacular. It was as though an artist crafted this particular plate of nachos. Despite the fact that I felt rather ill a couple hours after consumption I still highly recommend you make the trip and don’t forget to ask for a meximelt.

more stories
Previous
“I sit here all alone and watch the saucers in the sky”
Next
Holy Cow: Marvin Expanding