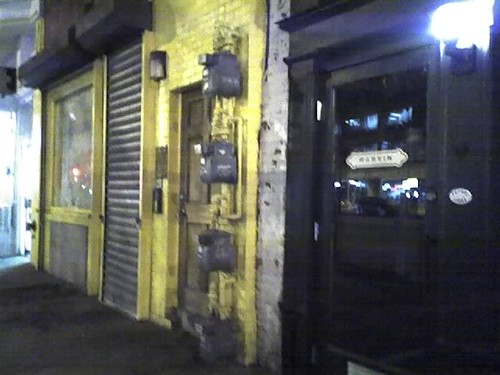 Wow, that was fast. Marvin the wildly successful new bar with the sweet outdoor space up top is set to expand. Thanks to an eagle eyed reader for tipping me off to the liquor licenses on the adjoining building next to Martin. You can see from the photo they will be expanding into the yellow structure. (Sorry for the quality of the photo but I only had my cell phone.) Obviously the space still needs a bit of work, so it is not clear when this addition will be open. From the liquor license it said the space will possibly have DJs and up to a five piece band. When I went into Marvin to inquire about the expansion they said that it will be part of Marvin but separate from the dining area. They wouldn’t/couldn’t go into detail about what the space will look like or when it will open. It’s not quite clear if it is going to be a totally separate space or connected in some way.  I’m intrigued by the potential. What do you guys think? Too early to expand? Or is this just what the doctor ordered?

more stories
Previous
It’s a Christmas Miracle!
Next
House of the Day