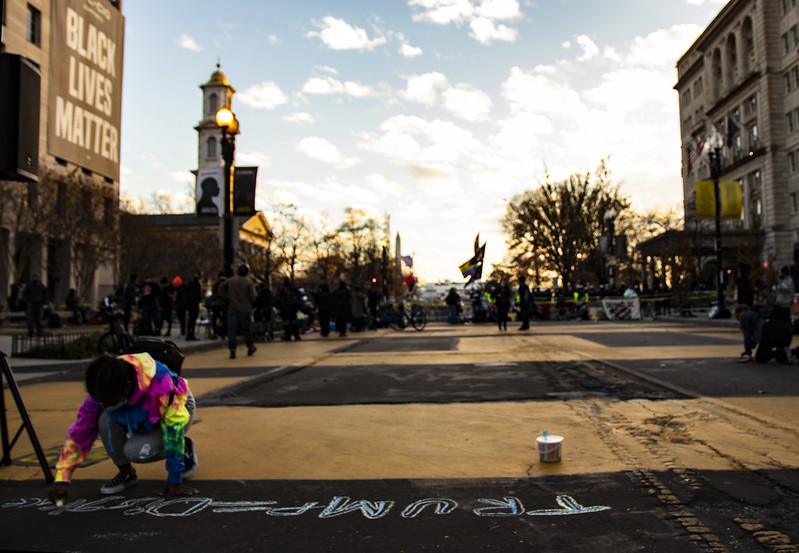 “DC’s faith-based organizations are at the very heart of our community, giving us hope in the face of darkness. They embody our DC values of love and inclusivity. An attack on them is an attack on all of us. This weekend, we saw forces of hate seeking to use destruction and intimidation to tear us apart. We will not let that happen, and continue to stand together strong and United to Love. The Mayor’s Office of Religious Affairs and the Metropolitan Police Department are engaging the impacted houses of worship today, and anyone with information or video in the area of the houses of worship should call 202-727-9099 or text 50411.”

From the National Cathedral:

“The racist and religious overtones surrounding the effort to discredit the presidential election were on ugly display in downtown Washington on Saturday night, just blocks from the White House.

After a pro-Trump rally that aimed to overturn the will of the people in the presidential election, demonstrators and members of the Proud Boys ripped down Black Lives Matter banners outside two historically Black congregations, Asbury United Methodist Church and Metropolitan AME Church. In a chilling scene, one was set on fire as crowds chanted profanities.

We reject the version of Christianity that seeks to provide a mantle of spiritual authority to the poison of White nationalism. Religious leaders who bless these rallies, or lend their voice to the effort to subvert democracy, make a mockery of our faith. What we are witnessing is nothing less than idolatry–the worship of someone other than God as though he were God.

The blatant racism of this lost cause is alarming. The senior pastor of Asbury United Methodist Church was right to call the burning of her church’s banner a new version of cross burnings.

White hoods have given way to black-and-gold militarism. Such hatred grieves the very heart of God, and we cannot turn a blind eye to such displays of white supremacy.

We believe that Black Lives Matter because Black lives matter to God. The Proud Boys and their hatred are not welcome here.

For us at Washington National Cathedral and throughout the Episcopal Diocese of Washington, this is the season of Advent, in which we wait in expectation for the birth of Jesus, the Prince of Peace. This we know: God’s Kingdom is built with open hearts, not clenched fists. Its streets are paved with the living stones of love and justice. Racism and hatred have no place in God’s Kingdom, and we will grant them no home in our city.”

The Right Rev. Mariann Edgar Budde
Bishop of the Episcopal Diocese of Washington

“On Friday night we shared a post about our Black Lives Matter sign being stolen, and so many of you were supportive.

On Saturday we replaced the sign and by the afternoon it was ripped down once, re-put up, and at night, ripped down and taken. A gang of Proud Boys descended on the church, harassed our leaders and took the sign away. This group came back a second time to intimidate us.

Later Saturday night we learned we were part of an intentional targeting of houses of worship. Two historic Black churches were attacked — our neighbors Metropolitan African Methodist Episcopal and Asbury United Methodist. Their Black Lives Matter signs were ripped down, stomped on and burned by the Proud Boys.

We are humbled to be a small part of a bigger movement for dignity and justice. We are bold to figure out how we show up declaring out loud, Black Lives Matter!
Silence is not an option.

So it’s Sunday afternoon, and we have a new homemade sign. We continue saying, #BlackLivesMatter.”
– Rev. Karen Brau

Read more →
More Stories
“what are some things we should ask/get written assurances regarding before signing a new lease on a house?”Today’s Rental was chosen for the couches