…and he would still be here, his daughter would grow up with a father, & there would not be any protests. My focus remains on the immediate investigation & the long-term work we need to do as a community to end violence. I wish the FOP were willing to be part of that work. 2/2

“The following is a statement from Ward 6 Councilmember Charles Allen, Chair of the Committee on the Judiciary and Public Safety, following yesterday’s partial release of MPD body-worn camera footage:

“I have been in contact with family members of Mr. Hylton multiple times since the incident. They are grieving and in deep pain processing his death. I shared with them my deepest condolences for their loss.

We have more questions and few answers after yesterday’s partial release of two Metropolitan Police Department officers’ body-worn camera video footage of the injury, and later death, of Karon Hylton. What we do know is that he should be alive today, and that how Mr. Hylton was treated, and why he was killed, cannot be disconnected from his race.

The Executive has released some video footage of the incident, and it is important to be clear about what is known and unknown at this time:

The video that was released was redacted and edited by MPD. I have requested the complete unredacted and unedited video yesterday, and under the Council’s recently enacted policing reform emergency legislation, the Executive must provide the requested video within five business days;

The two officers whose video was released did not turn on their body-worn cameras until after Mr. Hylton was struck, which is not MPD policy. For that reason, we do not have the audio of any officers in the car until the cameras were activated. We also do not know if the other two officers activated their cameras. We are able to see the video from immediately before Mr. Hylton was struck because the cameras constantly buffer.

From the video released, the officers are clearly pursuing Mr. Hylton, and I have also seen home surveillance video which appears to show additional pursuit before the released video begins. Such a pursuit would have violated MPD policy regarding vehicular pursuits.

We do not yet know how the interaction began, although MPD has communicated their position.

We do not know how Mr. Hylton was known to the officers in the car, although we know one officer called Mr. Hylton by his first name after he was struck and lay motionless on the ground.

One of the most viscerally disturbing parts in the footage is the familiarity and lack of urgency of the responding officers after Mr. Hylton was struck and lying critically injured on the ground. At least one officer knew his first name and called him by it from afar as he lay motionless on the asphalt. The officers walked, not ran, from the cruiser to assess Mr. Hylton’s medical needs. This cannot be divorced from the individual and systemic devaluation of Black lives in the District, particularly those of young Black men, and I find it hard to believe the officers would have acted with a similar lack of empathy with a white resident.

As our community grieves and demands answers, we must ask: what was going to be accomplished by the chase and traffic stop for not wearing a helmet? How would it have made our community safer? How would it have built trust between law enforcement and community? We must also question whose interests are served as a narrative about Mr. Hylton and his death is deliberately constructed and replicated. 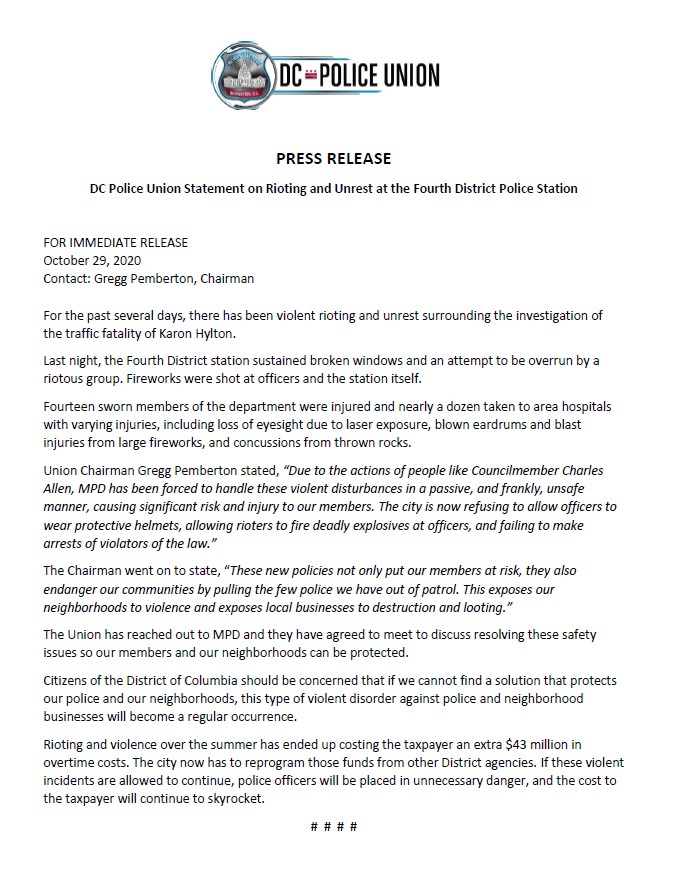