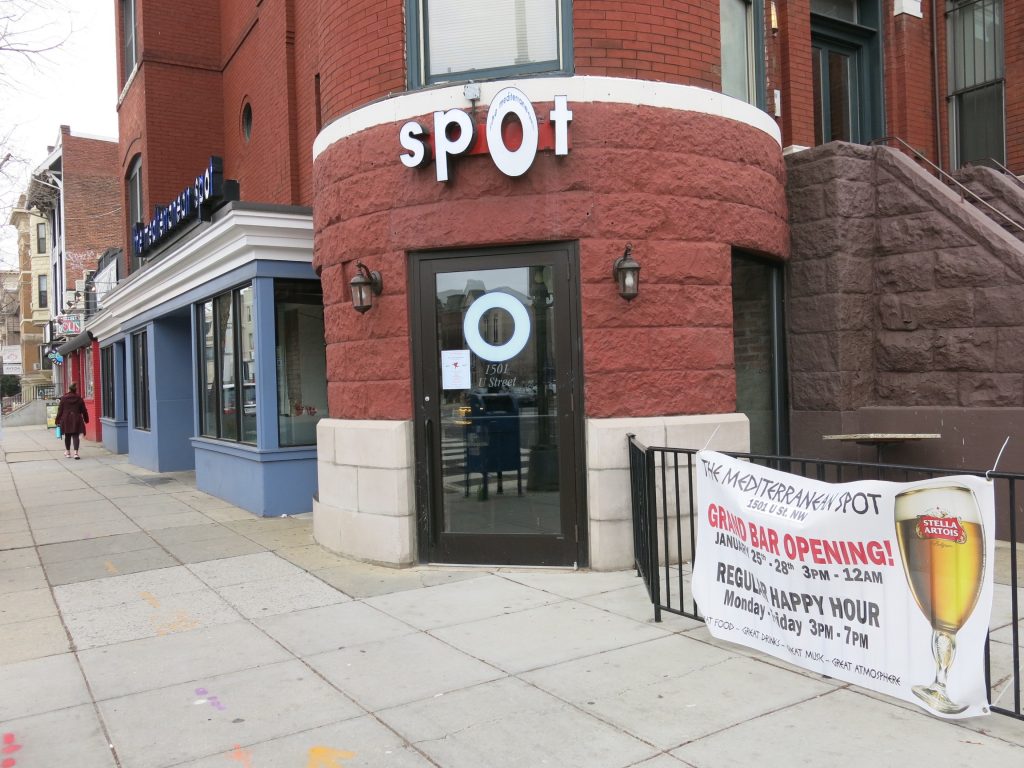 Advisory Neighborhood Commission (ANC) 1B/U Street, at its regularly-scheduled monthly meeting May 3, voted to protest a request by Pal the Mediterranean Spot, a restaurant at 1501 U Street NW, to be allowed to serve alcohol until 2am Sunday-Thursday, and 3am Friday-Sunday. Currently, the restaurant must cease serving alcohol at midnight, seven days a week.

At the ANC meeting, the owner of Pal the Mediterranean Spot testified that he had been operating the restaurant in its present location for six years, and had been doing business in the area for 20 years [Ed. Note: previously as 24 Seven down the block.] The restaurant had not had problems “with any neighbor except one”. The owner challenged anyone to show that his restaurant had been anything but a law-abiding operation, “if you have any picture”.

A head of a tenant’s association of a nearby property testified the restaurant was a good neighbor. “I’m shocked,” he said, about the complaints about the restaurant. “I don’t notice any problem.”

A neighbor who wished the ANC to protest the request also spoke. She said she has a residential property that shares a common wall with the restaurant.

“We’re not trying to put them out of business,” the neighbor said.

The neighbor said she wanted Pal the Mediterranean Spot to be “on an equal footing” with other U Street establishments. Other nearby restaurants and bars had a written settlement agreement with the ANC, which protected neighbors by specifying hours of operation and of liquor service, and this establishment should have one, too.

The neighbor also pointed out that the restaurant had been cited twice by DC liquor-licensing authorities, once for not having an officially-certified alcoholic beverage manager on duty (a $250 fine) and another time for failing to file mandatory reports.

The ANC voted to protest the request for later liquor-service hours on the grounds of “peace, order, and quiet, to include noise and sound mitigation, trash, hours, and lack of egress.”

Pal the Mediterranean Spot was first granted a liquor license with its current hours in 2014 (see an 18-page .pdf document here) over the objections of neighbors.

Read more →
More Stories
Your Afternoon Animal FixHigh on Hyattsville? Tell a prospective home owner what you love about it.