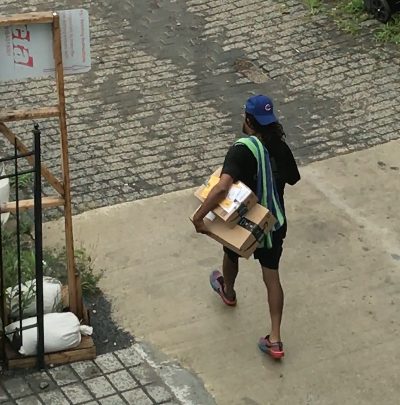 Our condo building, on the 1000 block of Harvard St NW, has been having an ongoing issue with package thefts.

Saturday afternoon, a man approached the back door to our building and rattled the door repeatedly. When we came into the hallway, to investigate the noise, he took off.

A few minutes later we saw him walking down the alley, now with several Amazon packages. When he noticed us watching he changed directions (it appeared he was originally going behind parked cars – I’m assuming to open the packages and ditch the boxes) and instead kept walking.

We’ve checked and these packages were not from our building – but based on his attempt to get into the building this may be our repeat offender.

I wanted to share the video, in case anyone in the area sees or recognizes this guy – this happened in broad daylight, so the area should be aware he may attempt to enter their homes as well.”