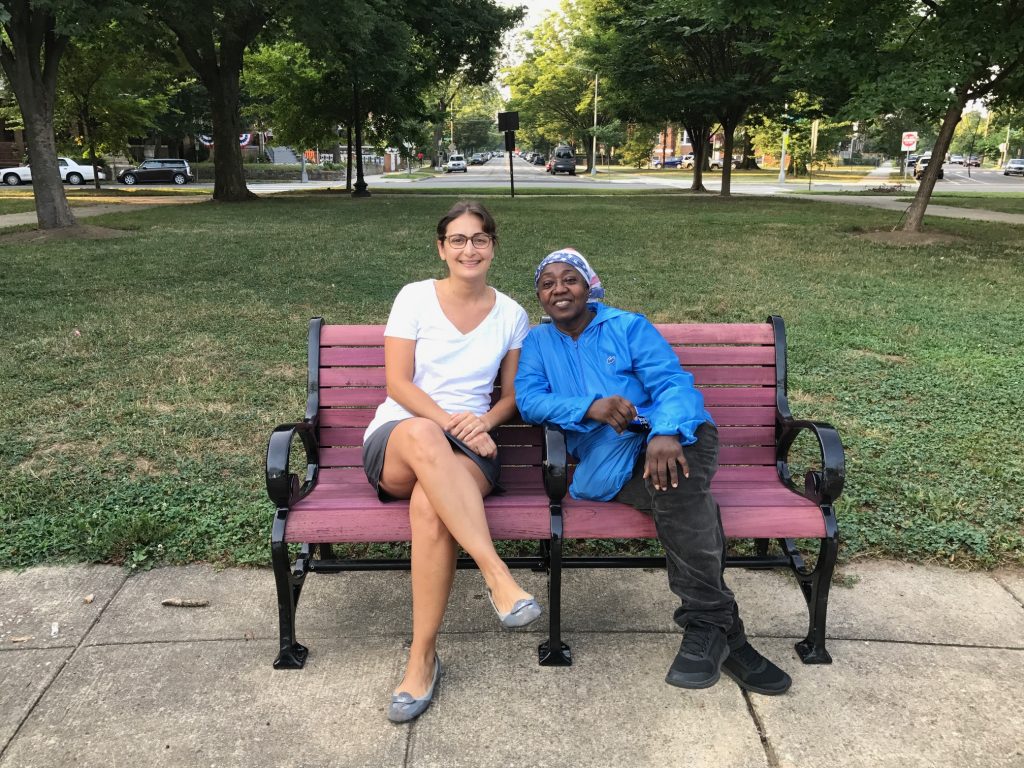 “ANC Commissioner Amy Hemingway and resident Lydia Barclay being the first to sit on the benches.”

“I am thrilled to report NPS is in the process of installing four benches in Sherman Circle. This is the result of residents’ requests and passion, and support from ANC 4D, Mayor Bowser, Councilmember Todd, and 4C Commissioner Joe Martin.

The benches arrived at 6:56am this morning. And by 7am Ms. Lydia Barclay, from 8th and Hamilton, was the first person to sit on them. She couldn’t contain her excitement, having spent nearly 40 years walking this circle. While Ms. Barclay sat for a times seven minutes, she named countless benefits of the benches, from “welcoming residents to rest after exercise to reading a book.” She named a number of her friends she was starting to tell so they could come down soon.

The NPS team, in coordination with me, placed the benches close to street lights and on the concrete, per community feedback. The goal is to move the “hidden” trash can closer to, but not too close to, one of the benches as well. This is one way to alleviate residents’ concerns about potential trash increase. As you know, I got the third trash can installed last November.

The four benches came at no cost to the District (and no new cost to NPS), having been refurbished over the last couple of months. I’m told their among the highest quality in the city and are just like the ones at Carter Barron Amphitheater. The reddish color apparently will eventually turn a nice grey.

Thank you to the community for the support on this initiative, which is part of a larger effort to enhance pride of place around Sherman Circle. On November 11, we’ll be working with Carol Herwig and Casey Trees to plant and replace trees that the cultural register shows are missing. I will keep you posted on other initiatives in the works as well.”

more stories
Previous
“TSA at Columbia Heights Metro?”
Next
Sounds Like an Apple Store Really is Coming to Union Market!?!