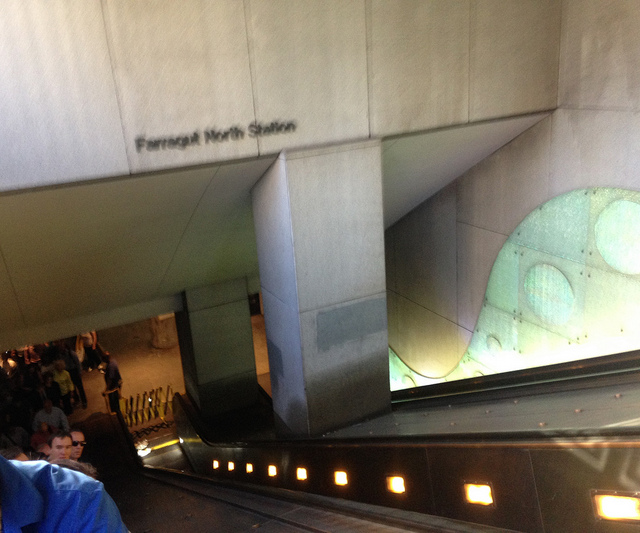 This is Farragut North at K Street this morning. Three escalators: one going up (packed), one broken (empty), and one going down (empty). However, there is a huge line all the way down through the turnstiles to the train platform to exit the station. Yesterday, the station manager actually had to shut down the turnstiles and force people from this exit because it was too crowded. Seems like a real waste. No one is working on the broken escalator (gee, wouldn’t that be a useful staircase!) but there are four metro employees standing around escalator drinking soda. Wouldn’t it also be possible to turn off the down escalator and let people walk up/down since there are so few people entering the station? While today and yesterday were particularly bad, the escalator management at this station is a daily issue (and if you met the station manager, you wouldn’t be surprised why). There have been mornings where two of the escalators are going down with no one on them and one going up with a long line. It’s this sort of poor management that again demonstrates to me that without cleaning house at the station management level, we’re throwing good money after bad.”

After 30 years in transportation operations, Joe recently served as a consultant to the General Manager/CEO on rail organizational and fleet management as an associate for Bianco Associates.

“Working with Joe on restructuring Metro’s rail operations gave me an opportunity to learn his strategic approach to operational safety, day to day safety culture, and his customer service orientation, which are consistent with the way I want Metro to conduct itself moving forward,” said Paul J. Wiedefeld. “I am pleased that Joe sees us as an organization that is changing and hungry for improvement, and that he is enthusiastic about taking on this crucial role.”

Until this year, Leader served as Senior Vice President of the Department of Subways, New York City Transit, which includes 27,000 employees, 800 track miles and 469 stations. He previously served as Chief of Safety Investigations for NYC Transit. Through a strong incident command structure and a solid safety and customer service culture, Leader and his team were credited with restoring service in the wake of Superstorm Sandy. He also led a comprehensive maintenance program that accelerated track work, and improved safety and productivity.

Leader has an electrical engineering degree from Manhattan College and serves as a local volunteer firefighter.

In a notice to Metro employees today, Wiedefeld thanked Jack Requa for his support as Acting COO, and said he will resume his role as Executive Managing Officer.”