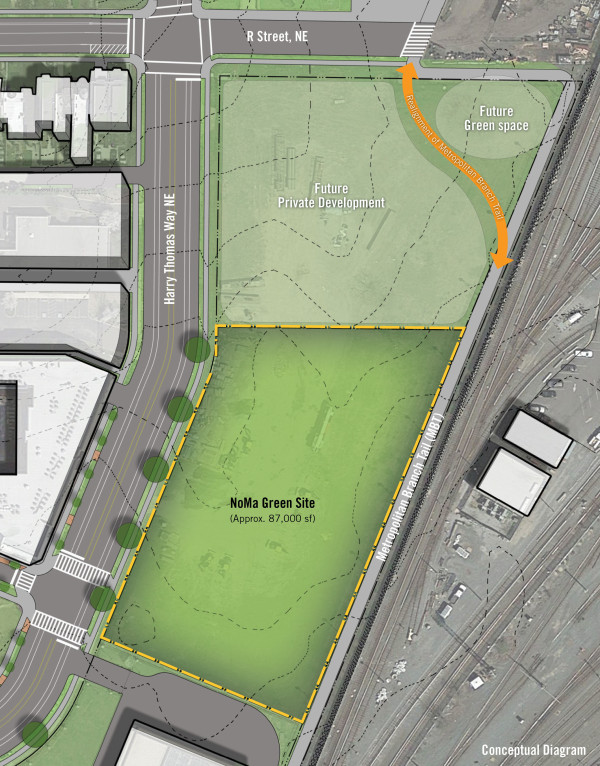 “The NoMa Parks Foundation, an affiliate of the NoMa Business Improvement District, announced today that it will acquire its third parcel, an approximately half acre site at the intersection of R Street, NE, and the popular Metropolitan Branch Trail (MBT). This acquisition has been accomplished through a collaboration with Foulger-Pratt Development and with strong support from Pepco from whom the parcel was acquired. No funds from the Foundation’s original $50 million NoMa Parks grant will be required to close on this important parcel. Instead, Foulger-Pratt will donate the parcel and will also provide the NoMa Parks Foundation with certain design consultation rights as well as other community benefits. Ultimately, the new park will be transferred to the District of Columbia Government.

This acquisition of additional land to improve the MBT and provide additional park space was first envisioned in a joint study of the MBT executed by the NoMa BID, the Metropolitan Police Department and the District Department of Transportation in 2015. That study recommended straightening the “Z-turn” at R Street as an important public safety measure, among other things. “Adding this new land is so important to improving the MBT and assuring another fabulous park experience for the residents of the NoMa neighborhood and all of Northeast. We look forward to partnering with the community to plan this new green space,” said Robin-Eve Jasper, president of the NoMa Parks Foundation.

Foulger-Pratt will be developing a residential and retail project on the balance of the property bounded by the Foundation’s previously-acquired 2-acre park to the south, Harry Thomas Way on the west, and R Street to the north.

“The retail in our project will be a terrific amenity for the park and the community,” said Michael Abrams, Senior Vice President for Acquisitions at Foulger-Pratt, “And having a project adjacent to a wonderful park, the MBT and all the great things going on in Eckington is a tremendous opportunity for us.”

“We were pleased to partner with the NoMa Parks Foundation and invest in the health and well-being of our community,” said Pepco Region President Donna Cooper. “In addition, the improvement in public safety that will come with realignment of the MBT and the provision of better access, will be important benefits to the District of Columbia and the communities served in this fast-growing area.”

Acquisition of this parcel is just the latest installment in the remarkable story of the NoMa Parks Foundation’s success in persuading private property owners to partner in creating unique and wonderful public spaces. Despite the scarcity of public land in NoMa, the Parks Foundation will deliver more than 3 acres of public spaces, including the NoMa Meander, a three-block long retail, pedestrian promenade. In the near future, the full complement of terrific new parks will be part of the list of wonderful amenities that NoMa offers as the premier neighborhood in which to work and live in the District.”