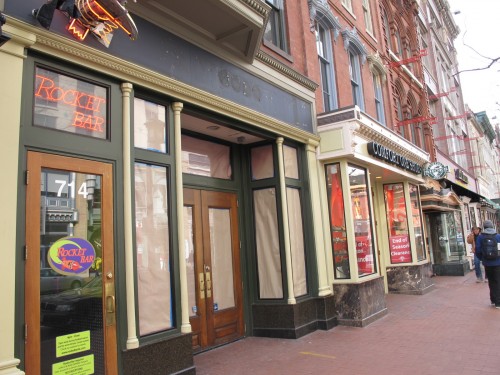 Ed. Note: Another Philly export, HipCityVeg, will be coming nearby at 712 7th Street, NW in the former FroZenYo space. So let’s count the Philly expats now – these guys, Le Diplomate, Pizzeria Vetri (coming), La Colombe, Village Whiskey (coming) and Rural Society. Who else?

“Philadelphia-born startup, honeygrow® is excited to announce that it will be opening two (2) locations within the Washington D.C. metro area this year. With seven stores currently open, and several more on the way, the locally minded stir-fry and salad specialists are proud to be opening along with Shake Shack and Zara within the newly redeveloped façade at the Fashion
Centre at Pentagon City in Arlington, VA.

A second location is planned within the bustling Chinatown neighborhood at 716 7th St NW, Washington D.C., which was formerly occupied by Comfort One Shoes and is adjacent to WeWork. The stores at Pentagon City and Chinatown are slated to open this summer and this coming winter, respectively.

Per Justin Rosenberg, Founder and CEO of honeygrow, “From Philly, we’ve watched a lot of concepts start in D.C. and then head elsewhere in the US, so I’m proud to be doing the reverse commute and bring something from Philadelphia to the D.C. fast-casual restaurant scene. There’s a lot of concepts doing salads, which has been done for a while, and considering that more than 65% of our sales are stir-fry originated, we’re excited to bring something different to the market and to the D.C. fast-casual space.”

Both locations will feature honeygrow’s proprietarily-designed touchscreen ordering system where guests can customize suggested stir-frys, salads + honeybars or create their own. As the “honest eating + growing local” tagline proclaims, these new locations will feature locally + seasonally sourced ingredients, noodles prepared freshly by ramen chefs, housemade dressings + sauces, and proteins sourced from providers including Creekstone Farms and FreeBird. The “local” component also extends into the community; each location will feature custom commissioned artwork by D.C. area visual artists. These new locations also feature an updated aesthetic designed by Jennifer Carpenter Architects in conjunction with our D.C. based architect of record, Streetsense.