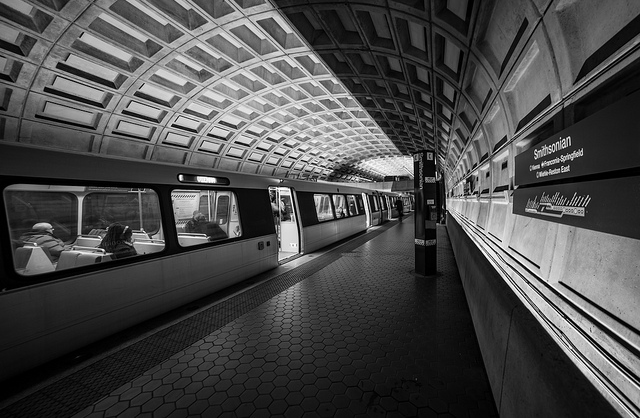 “Reconstruction of the Metrorail system will continue over the weekend of February 19-21 with service adjustments on all six lines. Trains will operate as follows:

“Metro is advising customers on the Orange, Silver and Blue lines of important track work beginning at 8 p.m. next week on Monday and Tuesday nights that will improve safety and reliability.

Metro is planning to replace nearly 400 feet of rail through a sharp curve in the area of Smithsonian Station. Due to the labor-intensive nature of the work, crews will need more time than is available during the overnight hours when the system is closed. As a result, Metro will begin the work at 8 p.m. for two consecutive evenings.

In addition to replacing rail, crews will use the time to replace more than 100 third-rail insulators and approximately 2,000 fasteners that hold the rails in place. Leak mitigation, drain cleaning and general debris clean up will also occur.

Customers on the Orange, Silver and Blue lines are advised:

• On Monday, Feb. 22, and Tuesday, Feb. 23, beginning at 8 p.m. each night, Metro will conduct track work between Smithsonian and Federal Center SW stations.
• Orange and Blue line trains will single track through this area, resulting in delays of approximately 15 minutes in each direction.
• After 8 p.m., Silver Line trains will run between Ballston and Wiehle-Reston East stations only. Riders traveling to Silver Line stations in Virginia should take an Orange Line train to Ballston, and then transfer to a Silver Line train on the same platform.”

Read more →
More Stories
Your Afternoon Animal FixDCPL: “Take a tour of our latest DIY space where you can digitize your home movies, scan photographs” and more