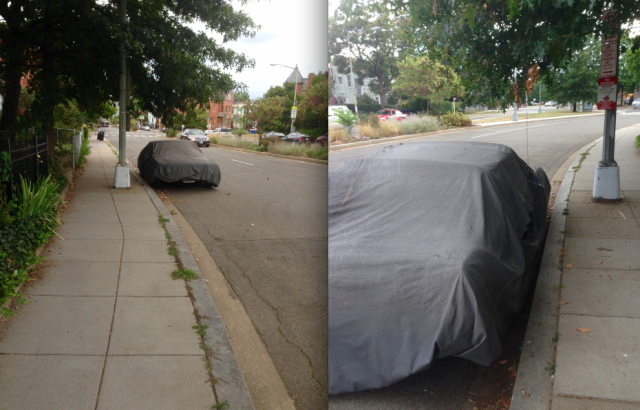 We have a neighbor on the 1800 Block of Vermont Street NW who decided over 6+ months ago that the parking spot in front of his house is now officially his and while the rest of us have to jockey around for parking spots and move our cars during Street Sweeping days/hours he doesn’t.

You can’t tell from the photo since his car is 99% of the time covered with a grey tarp but it’s an older Red Mustang Convertible and the only time we saw it uncovered we saw he (young guy – possibly college age) did have DC Tags but a Registration/Parking Permit that expired October 2014. He’s also so brazen that the few times when the car is not there we’ve seen orange traffic and construction cones blocking the spot so no one else can park there. Then a few hours later he’s parked there again with the cover on.

The next door neighbor once politely (although I wasn’t there to confirm) asked to him to play by the rules and was apparently cursed out (again I wasn’t there) and physically intimated just by his large size and have since left notes, called 311, and even flagged down an MPD who have said as long as the cover is on it he can park here forever because DDOT and MPD don’t want to be responsible for any potential damage by removing it to ticket or tow him.

One one hand we give him props for figuring out a way to outsmart the system. On the other we’d like him to follow the same rules as all of us and gain (if he doesn’t renew his plates) a much needed additional street parking spot. Anything we can do to get him to move the car or get someone in DC Government to assist?

BTW – These pictures were taken during Street Sweeping hours yesterday.”

Read more →
More Stories
Advice on recovering stolen property for sale on eBay?Photos from PoPville – Down by the River