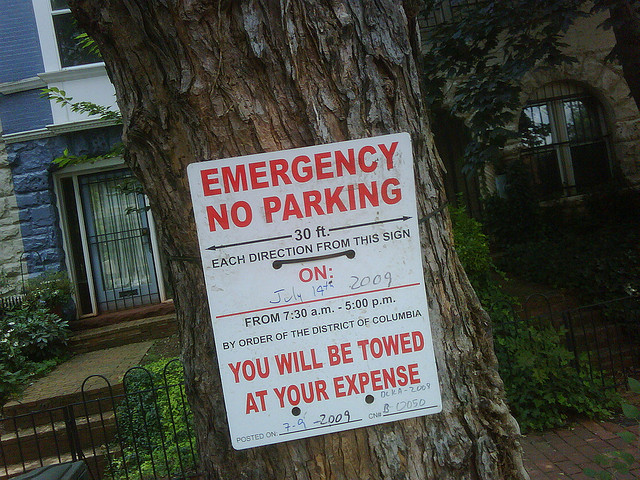 On the one hand:

“I’ve seen quite a few posts on Popville about little or no notice when posting emergency parking signs, but not much about enforcement. I recently moved between apartments within the district and found the enforcement to be essentially non-existent.

New rules have been put in place to help avoid ticketing and towing when the signs are not posted at least 72 hours. Now the signs must be posted in advance and verified by DDOT in order for vehicles parked in the reserved spaces to be ticketed and towed. Well, at least in theory…

During my recent move, I had my signs up on a Sunday in advance of a Friday morning move. The exact start time was 5 PM on a Thursday as I anticipated vehicles would be parked in the spaces regardless of hanging the signs for the moving truck. I was right.

At 10 PM the evening before my move, I called to request the four cars to be ticketed and towed. The next morning, I got up at 6 AM. No tickets. No towing. I called to follow-up on the status of my request and was informed that there is a bizarre Cinderella rule and my request whether addressed or not was closed at midnight and that I would need to file a new one.

Subsequent to filing a new request, I was informed that the city workers who can actually write tickets would not be clocking-in for work until 7 AM and that I should then allow 2 hours for them to arrive. In addition, the police are not able to write tickets now because they do not have access to know whether the signs were verified as hung at least 72 hours in advance.

In short, there is absolutely no way to enforce these signs for an early morning move and I essentially paid $55 in order to avoid a larger ticket for having a moving truck blocking the street. Not being able to park in the designated spaces also complicates the moving process and can increase the amount of time professional movers are on the clock (i.e., I pay more). I’m wondering if anyone else has a similar experience, especially with getting a refund. I’ve contacted DPW, Office of the Mayor, and two city council members with little progress.”

and on the other hand:

“I live on a block that manages to have a lot of resident turnover – brownstones with group houses and apt buildings. It follows that there are frequent moving trucks and no parking signs. A few between trees is to be expected and understood. Moving sucks and you don’t want to have to lift or move furniture and items any farther from your house than need be. But recently I have noticed people stretching out their private moving zones longer than the Middle East peace process. Just tonight someone thought it within their right to rope off almost 90 feet of public parking space to enable their move. That’s just shy of seven average car lengths, a full three more than I believe DDOT allows. I took down one of the signs in order to call the offending party, but I am curious if PoP folks have grumbled about this recently. My car has been towed several times when people throw the signs up a day or two, or even the night before they move, when they are supposed to have them up, what five days in advance? Just strikes me that this issue is ripe for debate. How many others are riled? Having a car in the city is a luxury, but the oversight over the moving sign industry is certainly lax, in my experience.”