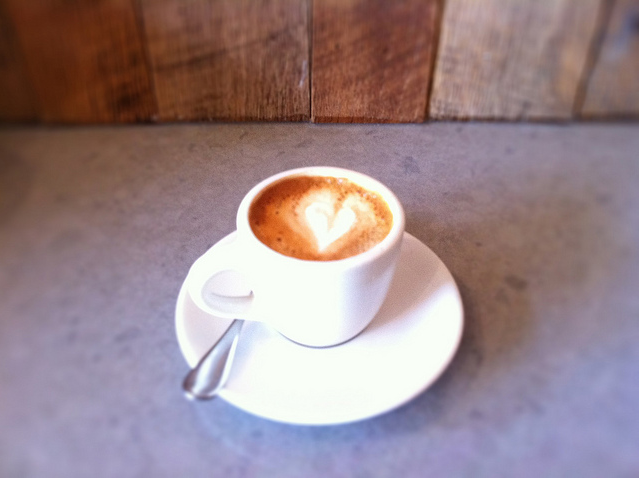 “This past weekend, a team of three Peregrine Espresso baristas traveled to Atlanta, Georgia, to compete in the annual America’s Best Coffeehouse Eastern Regional Competition as a part of the Coffee Fest tradeshow. After three days of competition against five other teams of baristas from throughout the east coast, Peregrine Espresso’s team won the 1st place trophy, $2000 and a berth at the National Finals competition in 2016. Peregrine’s team was comprised of Allison Bouley, Britt Calder and Joseph Stout and they bested Seeds Coffee Company of Birmingham, AL, and Black Water Loft of Floyd, VA, in Sunday’s finals round.

The America’s Best Coffeehouse competition debuted in Seattle in fall 2012 with a two-year regional cycle leading up to the first America’s Best Coffeehouse National Finals competition in fall 2014. The competition’s founders created it “to evaluate teamwork, hospitality, aptitude, professionalism, presentation and limits.” Each team is given 15 minutes to set up, 30 minutes of service time and 15 minutes to clean up, replicating a short shift at a busy neighborhood coffeehouse. During the service time, the teams serve a standard menu of coffee and espresso drinks to a mixture of customer judges as well as tradeshow attendees.

Peregrine Espresso previously won the America’s Best Coffeehouse Eastern Regional in New York in February 2013 and sent a team to the 2014 National Finals. Peregrine’s team placed fourth at the National Finals in Portland, OR, as Palace Coffee Company of Canyon, Texas, was crowned champion. Baristas from Peregrine Espresso have also placed highly in individual competitions, twice winning SCAA Regional Barista Competitions and twice placing in the top ten at the United States Barista Championship as well as placing highly in Latte Art and Brewer’s Cup competitions.

Owner of Peregrine Espresso, Ryan Jensen, says, “We think it’s a really valuable experience to compete because it allows our staff an opportunity to engage the national coffee community and share new ideas about coffee. It’s doubly rewarding to place well and I’m so proud of our team for their work both this weekend and every day.”

At Peregrine Espresso, our mission is to serve the highest quality coffee with excellent service and outstanding education while implementing honest and sustainable business practices. Founded in 2008, Peregrine has three DC locations at 660 Pennsylvania Ave SE on Capitol Hill, 1718 14th St NW in MidCity and 1309 5th St NE inside Union Market.”

More Stories
Beer Garden coming to NoMa will be called Wunder Garten, opening in AprilSpeak Out for D.C.’s Trees