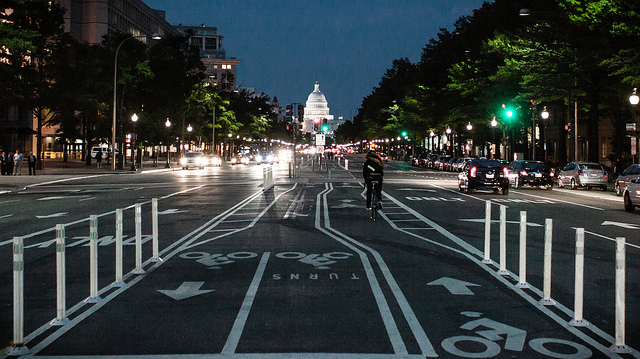 I may be a myopic twit but this guy from the Washington Post is a freaking dinosaur:

“What cyclists need is a separate network of biking roads, not bike lanes. Give them trails through wooded areas, away from cars and trucks. Once they enter high-traffic areas in the city, it’s off the bicycle and onto alternative transportation. Like two feet.”

I want to get this down because I literally just got back from driving down 11th Street. Which was an absolute joy. And why was it a joy? Because the bike lane made it a pleasure. I took New Hampshire Ave and got stuck behind a cyclist – fine, sharrows, we share the road – whatever. It sucked. I was stuck driving like 6 miles an hour. Then I got to 11th Street and the cyclist went to the bike lane and I was in my lane and it was beautiful. We were both on our way.

These people who reflexively scream against bike lanes – I just don’t get it. It is so clear and so obvious that the bike lanes not only benefit the cyclist but they benefit the car driver equally if not more so! I experience it every single morning. I’m in a car and I say thank freaking God for the bike lanes.

I’m not sure if these people are being intentionally obtuse or are just so keen to pit “one side” against an “other side” but they are flat out wrong.

So I look forward to reading his next screed on the danger of ballpoint pens – don’t you realize the inkwell is the key to the purest form of penmanship!?!?

Well as far as the fight against bike lanes are concerned, I guess the silver lining is that the dinosaurs eventually died out.