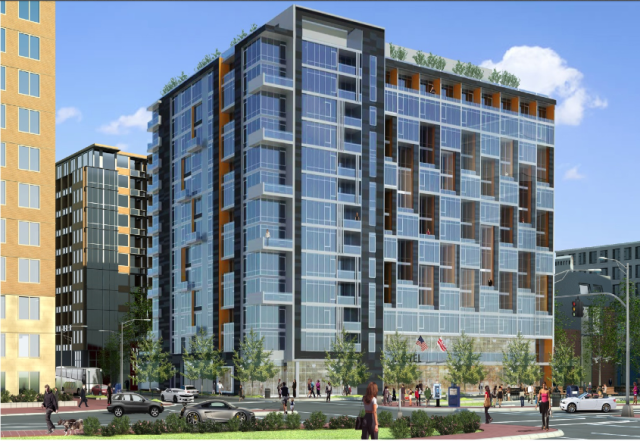 “Mayor Vincent C. Gray today announced the selection of the team of Peebles Corporation and Walker Group to redevelop the land parcel located at the intersection of 5th Street and I Street NW in Ward 6. Peebles Corporation and Walker Group were chosen as the team’s Best and Final Offer (BAFO) provided the highest monetary value for the land and the most affordable housing units. The proposal also includes a hotel.

“We are thankful for the tremendous interest we received in this parcel and are pleased to announce a selection as we close out the solicitation process,” said Mayor Gray. “The Peebles Corporation and Walker Group will transform this valuable site into a thriving and productive asset that will serve the District of Columbia and beyond.”

The parcel is situated in the heart of the Mount Vernon Triangle neighborhood, three blocks from the Walter E. Washington Convention Center, within walking distance to Metro lines, and nearby to public amenities such as Union Station and the Verizon Center.

The Request for Expressions of Interest (RFEI) was issued by the Office of the Deputy Mayor for Planning and Economic Development (DMPED) in April of 2013. DMPED received 10 responses and identified four shortlisted teams in December of 2013. Each shortlisted team submitted their Best and Final Offers in February 2014. As part of the first steps of the disposition process, the District will commence negotiations with the selected team over the next several weeks.”