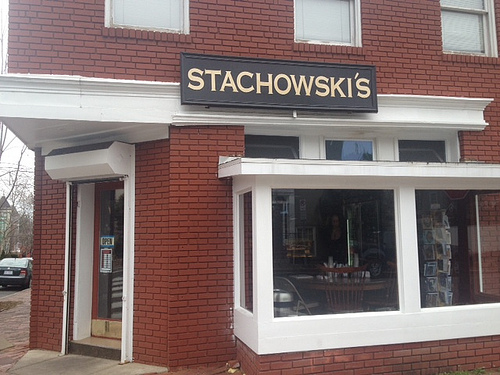 This edition of Eating Around Town was written by Abbey Becker. Abbey previously wrote about Menomale in Brookland and she lives near Eastern Market.

Let me tell you about the best sandwich I’ve had in DC. It’s in Georgetown, but I’m not talking about the Nobadeer at Jetties. Stachowski’s Market (1425 28th St NW) makes the tastiest (and largest) Italian cold cut sub I’ve ever had.

When I visited for the first time and saw that the 4 Meat Grinder cost $11.99, I thought, this sandwich better be the most incredible creation on the planet. A few minutes later, I was handed a hefting, butcher paper-wrapped sandwich that must have weighed at least three pounds. This thing was bigger than both of my hands. I opted to eat at home, though there’s a table at the front of the shop that seats about five people.

Sometimes when you get an Italian sub, it’s either dripping with grease, is messily assembled, has limp and underripe veggies, or is made with bland supermarket deli meats. Not this one. The grinder is layered with flavorful salami, coppa, mortadella, and sopressata, provolone, lettuce, tomatoes, red onions, hot peppers, and a good dousing of house vinaigrette on an entire ciabatta loaf. Each vegetable is crisp and fresh, the hot peppers still have a bit of crunch, and the vinaigrette is well balanced and isn’t too heavily applied. In short, everything on this sandwich has great flavor on its own, and every ingredient is necessary. I ate this sandwich for four meals.

On my second trip, I took two friends. I had the meatball sub ($9.99), which isn’t overly complicated. Good bread, solid homemade meatballs, tangy tomato sauce, and plenty of melted provolone. One friend got the Butcher Shop Dip ($11.99), with warm roast beef, provolone, and hot peppers on a baguette with a side of jus. It’s smaller than the other sandwiches, but it’s still piled with juicy roast beef. You can finish this is one sitting, but plan on that being your meal for the day. My other friend got the 4 Meat Grinder, and I kind of wish I had too.

The Pastrami ($11.99) is a favorite of many regulars. It’s on the fatty side for some, and the meat isn’t always sliced to the same thickness. But I’ve been told by many pastrami aficionados that this is one of the best pastrami sandwiches in DC. 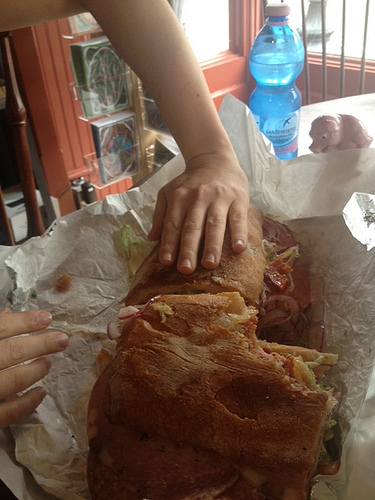 Stachowski’s is also a full-service deli that sells various sausages (kielbasa, smoked lamb, boudin blanc, linguica, weisswurst, etc.), pancetta, slab bacon, pates, terrines, prosciutto from three different animals, and just about any cut of meat you could want, including Berkshire pork. The right wall has a large selection of products from McCutcheon’s out of Frederick, and the self-serve refrigerated case is stocked with cage-free eggs, local milk and yogurt, bacon fat, duck fat, and more. They also sell fruits and vegetables, though you’re looking at $1.99 a pound for Russet potatoes.

I would be remiss if I didn’t mention the exceptionally friendly staff. You’re always greeted the minute you walk in by the girl at the register and the men behind the meat counter in button-down shirts and ties. What’s unique about this is they genuinely seem to love working there. They almost made me want to quit my full-time day job so I could slice deli meats and recommend cooking techniques for the bacon-wrapped, pate-stuffed quails they sell.

As a side note, I wanted to mention that I’ve had the G-Man at Mangialardo & Sons in Southeast DC. I know people love this sandwich, and I’m not saying I didn’t enjoy it, but Stachowski’s is far and away the best. Friends have said that the Italian at A. Litteri over by Union Market is about half the price of Stachowski’s and good, too. Without having had it, I can’t say with complete authority Stachowski’s is the best Italian sandwich in the city, but I have a hunch I’m on the right track.