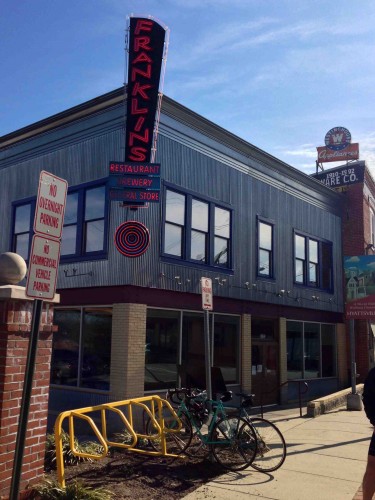 Biking around Town is written by Josh Nadas (@dcliterate), a daily bike commuter & avid rider who works for the National Park Service, and lives in Mount Pleasant.

I studied at the University of Maryland – that’s how I moved to this area. When I was a senior and of legal drinking age, I discovered Franklin’s – a brewpub and gift shop. It used to be so easy to get too by bicycle. From my house in Berwyn Heights, I could pick up the North West branch trail, and take it all the way there. It was pretty much perfect – I had easy access to fresh beer that I could port home in a growler.

Moving to the district made it harder to get to Franklin’s except by car, which is less than ideal because driving out to Hyattsville is annoying, and finding parking in DC when I get home makes the trip feel less worth it.

I wanted to find a reliable bike route to and from Hyattsville. So, I started experimenting with different routes, and eventually settled on what I am presenting today. There is debate as to the best route to Hyattsville from DC. Some people value U.S. Route 1 for it’s directness, but I don’t like how much traffic there is. Others prefer to use Michigan Ave, which turns into Queens Chapel Road and provides access to the bike path and other useful roads. I like to ride on Michigan, especially by the hospital, but when possible I prefer the bike path because there are no cars.

This route begins at the Columbia Heights Metro station, and ends at Franklin’s brewpub. As you will no doubt notice, I traced this route backwards from Franklin’s to the start. When heading out, head out on Irving street, and merge (to the left) onto Michigan. On your way back, just follow the highlighted route. You would have thought that the map I made to the pub before I had beers would have been straighter and true-er, but you would be wrong. A big thanks to my friend Brian for rolling with me on this ride.

Also – I forgot to give a shout out to my friend Kevin who told me about the haines point bridge access.

The bridge over the red line tracks by the Catholic U metro station can be a fast descent. There is some warping in the pavement on the right side of the right lane, along with debris. Please use caution.

At the intersection of Michigan Ave, 18th Street, and Varnum Street, you will pick up Varnum. The name of that street changes in the following sequence: Varnum street becomes Arundle road which becomes Allison street. Don’t worry about the name changes – all you have to do is stay on the same street.

At the closing of the ride, you reach the end of Decatur Street, and turn onto the bridge that crosses the train tracks, it’s probably safest to dismount your bike and walk. At that point you are 4 blocks from the destination. Be advised – there is usually glass on this sidewalk

Enjoy a beer when you arrive at your destination! I enjoyed the Black IPA, but the Oatmeal Stout is also good.