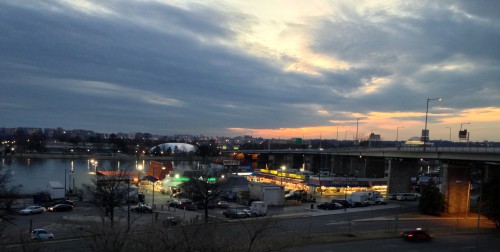 Biking around Town is written by Josh Nadas (@dcliterate), a daily bike commuter & avid rider who works for the National Park Service, and lives in Mount Pleasant.

One of the best places for an after work ride is Hains Point. It’s great for a number of reasons: it’s flat, there are very few cars, and you can go as fast as you want (be mindful that the National Park Police will stop cyclists for running the stop signs). For an after work cyclist, or someone who just wants a nice pedal without interference from motor vehicles, Hains Point is a haven. The only drawback to riding at Hains was getting there – or so I thought.

I’ve been riding in DC for many years, and I always gotten there by taking ohio drive near 14th street. The problem with Ohio drive is that you have to bike for about 200 feet on the onramp to 395 southbound, a dicey proposition. In fact, it’s downright rough. At that particular juncture, most cars are accelerating to merge onto the highway, and it can be tough to maneuver the bike over two lanes to get over to Hains Point. So when my friend Kevin told me about the bridge to get there, I was pretty excited.

As you can see on the map below, there is a very nice cycling path on one side of the memorial bridge. Originally, I thought this path was some kind of secret – but based on both the bike and foot traffic, it’s clearly not. With that said – if I have been riding as long as I have without know about it – then maybe you don’t know about it either. You pick up the path by heading down to L’Enfant Plaza, and riding out to the edge of the road. On the sidewalk, near the small park and observatory point, there is an easy to overlook gap in a concrete retaining wall, which marks the entrance to the multi-use pathway. The only difficulty is that you have to get your bike up and over some taller than average curbs. Not a big problem.

This path is really fun, easy, and provides a great view of the fish market. I hope you enjoy this as much as I do – even if it’s way too cold for laps at Hains Point.