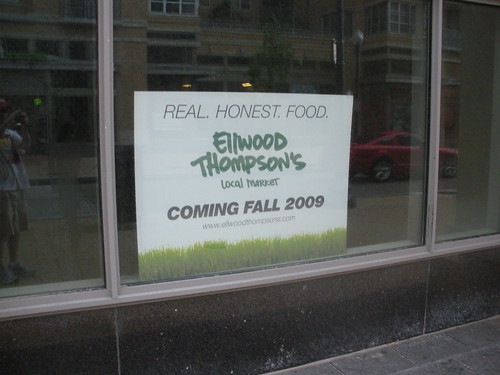 We’ve been wondering for months whether or not Ellwood Thompson’s was going to move into the space on Irving Street in the DC USA complex. As you probably surmised, it’s not looking good for a move any time soon. Thanks to a reader for sending an article from the Richmond Times Dispatch. While the Richmond Store is doing well the economy is going to have to improve for a DC expansion:

“In April, Ellwood Thomson’s scuttled plans to open a store in Washington. The 15,000-square-foot store would have been its second location.

Hood says the economy played a significant role in putting off the expansion.

“The timing just wasn’t right,” he said, though he hopes to open a store in the same D.C. location at some point.”

I wonder when all these vacant ground level retail spots in DC USA are going to fill in. Any guesses? One year, two years, longer?