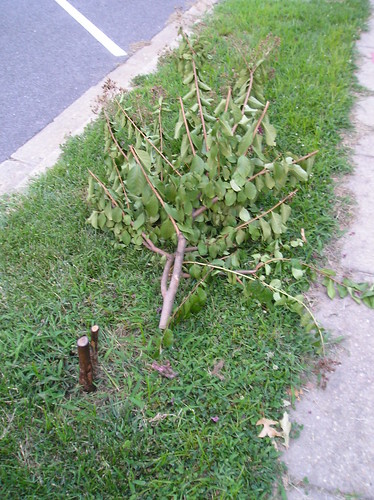 The morning of Wed. August 5th, I left my Parkview/Petworth house for only a half hour and came home to find the five year old crepe myrtle –which I had planted in memory of my grandmother the week after she passed away – cut clean about five inches above the base and just laying there. The look on my face prompted a neighbor walk up and tell me “those Mayor’s kids in the blue shirts just did that a few minutes ago”. Sure enough – the band of blue shirts was walking aimlessly down the block with branch cutters. Confronting them was to no avail – and so now I have a dead tribute tree that I bought and planted to show for all the great work Fenty’s kids are doing in this city this summer being paid for in part with MY tax dollars!

In the press release (http://www.facebook..com/note.php?note_id=214813510712) that announced the program’s kick-off back in June Mayor Fenty proudly proclaimed, “My Green Summer Job Corps will lead to a cleaner, greener nation’s capital. All summer, the young people in this program will also do meaningful work and learn skills they can use for the rest of their lives.” Um yeah Mayor Fenty — vandalizing neighborhoods – yup – that’s about the only skills most DC kids need to learn to live in this city for the rest of there lives!”

While a different program than the one we discussed last week, it certainly seems that more supervision for both these programs is required. Let me just add, that when I was a youth I was no saint. I did, however, have part time jobs since I was 13 years old (stock boy, lawn mowing, ass’t town handyman) and for all those jobs I was closely supervised to make sure I did the work I was being paid for. I’m not saying I would’ve vandalized shrubs but I may have taken a nap or two without supervision. So I’m not blaming the kids. It seems the program itself needs to be reexamined. I do think the program is a worthy and necessary one. But why can’t we demand closer supervision. It seems like an easy fix. Am I missing something?

Ed. Note: At 11am Monday morning, I will post a response from:
Alan Heymann
Director, Public Information
District Department of the Environment