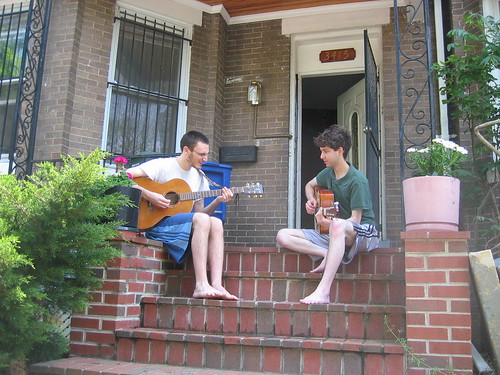 I thought it was super cool that on this beautiful Saturday we had these folks were just chilling on their porch playing their guitars. They were actually quite good! I also saw some folks throwing the frisbee on one of those small triangle parks and it almost felt like I was in college. It was such a relaxed friendly atmosphere. Folks throwing the frisbee, everyone saying hello to everyone else, so when people ask “what is so special about our neighborhoods, it’s just a place to live?” I totally disagree. I’ve lived in neighborhoods were people don’t say hi to one another. Neighborhoods where people don’t know each other’s names, or introduce themselves. Neighborhoods without music. We live in a place that has its share of problems, sure, but we also live in a place with many joys and those joys shouldn’t be forgotten when the occasional unpleasantness occurs. We live in a place where people play guitars on their stoops, and that is a very cool thing.