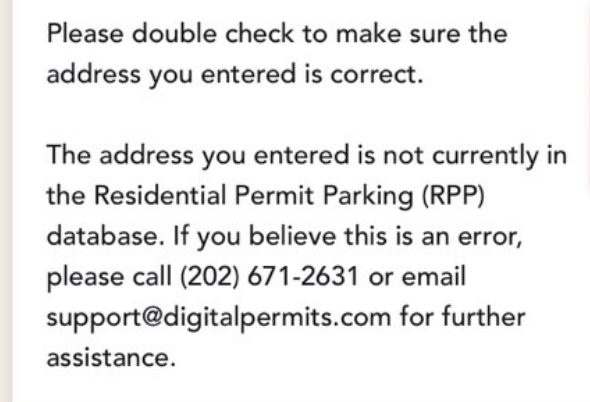 A resident from Ward 2 writes in part to DDOT and the Council:

“After spending over 2 hours trying to obtain a visitor parking permit this evening (used to take 75 seconds at a MPD station), including 41 minutes on the phone with a DDOT contractor, I wanted to reach out regarding this flawed and discriminatory new permitting system.

First the system is broken – neither the app or the website worked and I even stopped by my local MPD station with no luck. Everything had to be manually entered by a DDOT contractor over a grueling 41 minute phone conversation.

This system doesn’t even include the addresses of most residents and requires residents to have access to a printer. Other residents trying to obtain permits this evening had a myriad of issues including the system not recognizing 16th St, NW and a 200+ unit building that only has one unit listed as an address on the permitting site.

As bad as the system issues are, the new passes are ANC based, rather than ward based (as they’ve always been). This insane new policy ensures that less wealthy Ward 2 residents do not park anywhere near Jeff Bezos’ or other millionaire residents homes. I don’t even know what my ANC boundaries are, but I usually park my car 10 blocks away (wherever I can find a spot in Ward 2) because it’s nearly impossible to find a spot for my guests in the heart of Logan Circle where I reside.

You shouldn’t have to be a millionaire to easily find street parking in DC.”

Another reader tried using it and “it looks like the address isn’t in the database” Are others having problems with the new system as well?