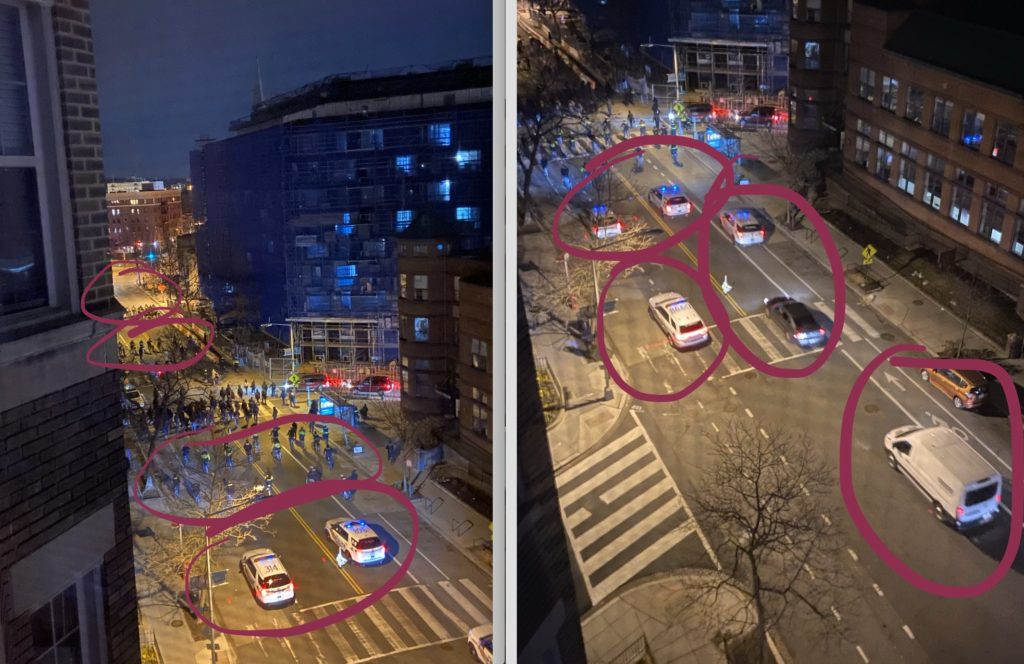 As if we needed more evidence that the DC police budget is extremely inflated and misdirected…this scene from Columbia Rd NW between 18th and 16th on the evening of 2/6/21. A small group of peaceful protesters (30-40 people tops; I’m guessing racial justice-focused based on their chants, but I do not know the organizing group nor do I speak for them) walked down Columbia Rd while a disproportionately large police presence preceded them AND followed them. In the attached image, the only group NOT circled is the protestors.

Police escorting large protests/marches to maintain traffic safety is one thing, but this is excessive and clearly intimidating.

Thinking about the hourly rate or hourly salary for all these bike cops, police vehicles, a rented Enterprise van, and MPD vans (In case they need to mass arrest? BS) boggles the mind. Can’t help but view this and think about the staggering statistic that “DC police arrested more than five times as many people at the height of the Black Lives Matter protests last summer than they did during the day of insurrection at the Capitol, according to a CNN analysis of Metropolitan Police Department (MPD) data” (CNN source link).

This is intimidating and shameful. Police aren’t protecting protestors, they’re surveilling and intimidating them. We must defund MPD and redirect resources to DC communities. For any who doubt the defund the police argument, this is a textbook example of why a massive police budget is both useless and harmful. Where else could the cost of this “police escort” have gone? Who do the police serve?

I encourage those who can spare it to donate to DC Mutual Aid groups or other community-led organizations. This list has suggestions.

Above pics: 2 lines of bike cops walking ahead of protesters. A line of bike cops, 5 police cars, and 1 van follows the protesters. Further down Columbia Rd, 2 cop cars sit at Ontario Rd. Not pictured, but 2 cop cars also sat at 18th & Columbia.”

Read more →
More Stories
“Saw the same sticky note on 4 cars in this block.”Today’s Rental was chosen because it’s on the top floor of the Cairo and the exposed brick, obviously