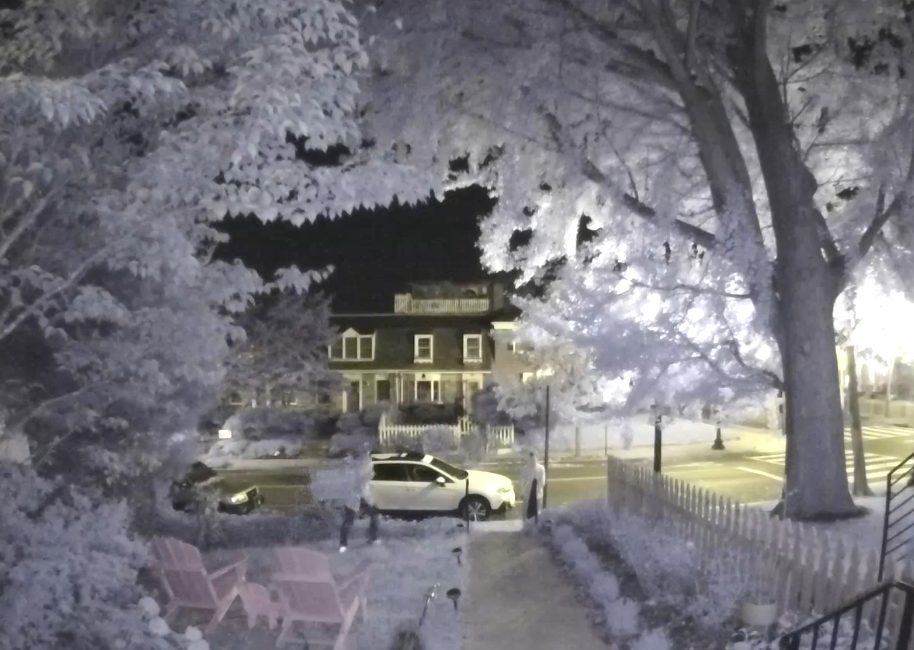 We live in the Burleith/Glover Park area and two young men – likely students – stole our Biden-Harris sign from our front yard last night. Our neighborhood is full of student group houses and these guys fit the demographic.

Hoping to spread the word (1) in case someone finds our abandoned sign in the neighborhood, (2) to let them know that you’re caught on video, and (3) we are just going to buy another sign which simply puts more money into the campaign.

Also a funny note: on Tuesday night, a family of deer invaded our front lawn, ate our flowers, and left a big pile of poop. The culprit stepped in the poop pile when he stole the sign. Karma works in mysterious ways!”

Related, from the Office of the Attorney General’s press release:

“Attorney General Karl A. Racine today issued an advisory to inform District residents that destroying election signs violates District law. According to reporting by the Washington Blade, election signs of three Advisory Neighborhood Commissioners from the LGBTQ+ community were destroyed in recent weeks. The Office of the Attorney General (OAG) also received complaints from residents that signs have been destroyed. Under District law, individuals who have been found guilty of intentionally removing, defacing, damaging, or destroying a lawfully placed election sign could face a fine of up to $100. When sign removal or destruction is found to be discriminatory, the perpetrator could face heightened civil penalties. OAG has introduced legislation to clarify that the Attorney General can also bring a civil lawsuit under these circumstances and seek penalties from those who commit bias-motivated acts.

“Intentionally destroying property, such as election signs, to target members of the LGBTQ+ community is unacceptable and unlawful in the District,” said AG Racine. “Today’s advisory warns District residents that these acts could result in serious legal consequences. I urge anyone who witnesses unlawful property destruction to report it to MPD’s non-emergency line (311).”

To better understand the laws regarding destruction of election signs, please read the FAQs below.

Is it legal to destroy election signs in the lead up to the election?

No. It is illegal under District law to intentionally remove, deface, damage, or destroy a lawfully placed billboard, poster, sign or other material relating to a candidate or referendum in the 30 days before the election or up to four days after the election. A candidate himself or herself, a sponsor of the referendum at issue, the owner of the premises where the sign is posted, and law enforcement can remove signs.

What is the penalty for destroying signs?

Those who break the law on removing, destroying, or defacing signs in the lead up to an election can be issued a civil infraction and charged a fine of up to $100.

What should I do if I believe signs were illegally removed?

You can report this using the Metropolitan Police Department’s non-emergency police line by calling 311.

What if signs are removed or destroyed for discriminatory reasons?

The District’s bias-related crime law prohibits, among other things, injury to property based on a range of characteristics of the victim of the offense, including race, religion, sex, sexual orientation or expression, disability, and other similar classifications. Destroying, defacing, or removing signs for discriminatory reasons could violate that law and subject the perpetrator to heightened penalties. In addition, the victim can bring a civil lawsuit against the perpetrator. OAG has introduced legislation to clarify that the Attorney General can also bring a civil lawsuit under these circumstances and seek penalties from those who commit bias-motivated acts. If you believe signs have been destroyed for discriminatory reasons, please contact OAG’s Civil Rights Section at [email protected].

If someone interferes with your right to vote through threats, intimidation, or coercion, or you become aware of any interference with the right of D.C. residents to vote, dial 911 or the Metropolitan Police Department. You can also contact OAG at (202) 442-9828 or email us at [email protected].

Voting in the District of Columbia

District residents can find information about registering to vote and voting by mail or in person in the November election on the D.C. Board of Elections website: www.dcboe.org. In the District, all active voters will be mailed a ballot and do not need a witness signature to submit their mail-in ballot. Voters can return their mail-in ballot by mail using the enclosed prepaid envelope, but it must be mailed by Election Day and arrive no later than Nov. 13. Voters can also drop off their ballot at one of dozens of drop box locations before 8:00 p.m. on Election Day or at one of the vote centers during early voting or on Election Day. Mail-in ballots started to arrive during the first week of October; if voters do not receive a ballot by October 21, officials recommend planning to vote in person.

OAG also recently published a Voter Advisory on Poll Monitoring to educate residents about protections against voter intimidation and a D.C. Voter Checklist to encourage residents to make a plan to vote.”