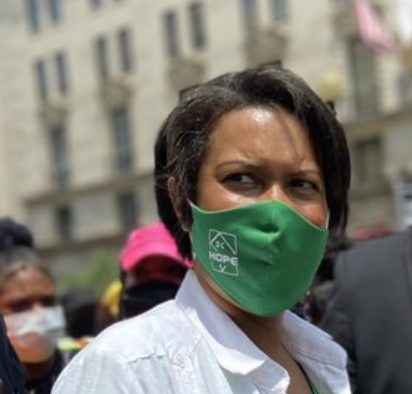 “Ahead of the Council of the District of Columbia’s first vote on the Fiscal Year 2021 Budget, Mayor Muriel Bowser urged the Council to seriously consider several key issues that are broadly problematic for sound budgeting and the operations of our government in the response and recovery from the pandemic and the recession it caused.

Among the concerns outlined by the Mayor in a letter sent to Chairman Phil Mendelson and members of the Council is the reduction in funding for the Metropolitan Police Department’s (MPD) Cadet Program, a very effective program that recruits and employs officers who are both from and familiar with DC neighborhoods and plays an important role in recruiting women and officers of color. Additionally, the Mayor highlights concerns with reducing the MPD budget by nearly $10 million, a reduction that would result in a level of sworn officers that has not been seen in DC since the 1990s, with seemingly no analysis on the impact this cut would have on the deployment of officers, officer response times to calls for service, and on community and neighborhood safety.

They Mayor’s full letter to the Council is below.

My proposed Fiscal Year 2021 (FY21) Budget, DC HOPE, was developed with a focus on health, opportunity, prosperity, and equity. The budget I presented to the Council reflects that even in times of unprecedented crisis, we can live up to our DC values and provide more Washingtonians the fair shot they deserve. It also reflected the reality that we are in the midst of a steep recession, caused by the impacts of the COVID-19 global health pandemic. Despite having to cut $1.5 billion from the FY20 and FY21 operating budget and $1.2 billion from the capital improvements plan, my budget maintained investments in our core programs and services, provided stability for District government employees, and responsibly used reserves. In order to accomplish this, it meant that we all had to make sacrifices in order to provide resources for our most vulnerable residents and maintain progress on key citywide priorities.

While there is much that we agree upon based on the budget recommendations of the Council, I urge the Committee of the Whole to seriously consider several key issues that are broadly problematic for sound budgeting and the operations of our government in the response and recovery from this pandemic and the recession it caused.

First, I would urge the Council to reconsider the creation of new offices, positions, and programs, while advancing a budget where we have asked our employees to make tremendous sacrifices, and where the government is operating in a hiring and spending freeze. I am confident that we will be able to address salary enhancements in future years as our economy recovers, but creating new positions and programs now, in a time of forced austerity, sends the wrong message to our employees who work so hard each and every day.

Second, the Council also proposes to reduce nearly $10 million from the Metropolitan Police Department’s (MPD) budget. This reduction would result in a level of sworn officers that has not been seen in DC since the 1990s, with seemingly no analysis on the impact this cut would have on the deployment of officers, officer response times to calls for service, and on community and neighborhood safety. Fewer officers would protect a District population that has increased by more than 17 percent, and where calls for police service have increased by 21 percent in the last decade alone. These reductions will be felt across all eight wards.

The Council should also strongly reconsider its reduction to the MPD Cadet Program and restore my proposal for an expansion. Our continued commitment to this very successful program will ensure that there is more diversity within MPD of women and persons of color. Over half of MPD’s current cadets are women and 95 percent are of diverse racial backgrounds. Since 2012, nearly 99 percent of Cadets who have transitioned to full time employment as officers and civilian employees, remain employed by MPD. This very effective program, which recruits and employs officers that are both from and familiar with DC neighborhoods, will undoubtedly continue to improve community relations with police.

Third, the current Council recommendations will cut core programs and services in order to create new programs, leaving key government services underfunded. By cutting funding for our workforce training programs and childcare subsidy, the Council will undermine our ability to help residents recover in the job market and will leave families without affordable childcare. Importantly, the reductions in workforce development will impair one of our key public safety programs, DC Pathways. I provided solutions to the Council to correct these reductions and maintain these key investments, but funding was instead used for other programs.

Fourth, despite the significant drop in revenues, I was intentional in avoiding increasing costs for District residents and businesses when formulating my FY 2021 budget and urge the Council to avoid tax increases. As none of the committees have made this recommendation, and as the Chief Financial Officer predicts that the District will face uncertain times for two years, it would be foolhardy to raise taxes this year. Nor is it necessary to balance a budget that increases education investments, delivers on a system of health care in Wards 7 and 8, including new hospitals at St. Elizabeths and Howard University, and continues to make significant investments in affordable housing and ending homelessness.

Finally, it is important to remind the Council that we are still in the midst of responding to this global health pandemic. The District has already spent, or is budgeted to spend, well over $600 million in responding to the COVID-19 pandemic. Importantly, the District is still incurring new costs, and will continue to do so, as the pandemic continues. There remain significant resource needs for contact tracing, testing, isolation and quarantine spaces for vulnerable residents, and food assistance.

Our fiscal outlook has not changed and the impacts of COVID-19 are still unfolding. The Chief Financial Officer will update the revenue forecast in August and there is the very real possibility that the budget before you may need to be reduced again to align with those updated projections; even as we continue the need to adapt our response to the current health pandemic and the recovery our residents and businesses need. I strongly encourage the Council to continue to work in partnership with us on how we best use our federal dollars to respond to the crisis and the needs of our residents and businesses as we recover.

I urge the Council to reconsider its approach to the issues described in more detail in the attached document and make the necessary adjustments prior to First Reading.

As always, I am available to answer questions or for further discussion of these issues. Sincerely,