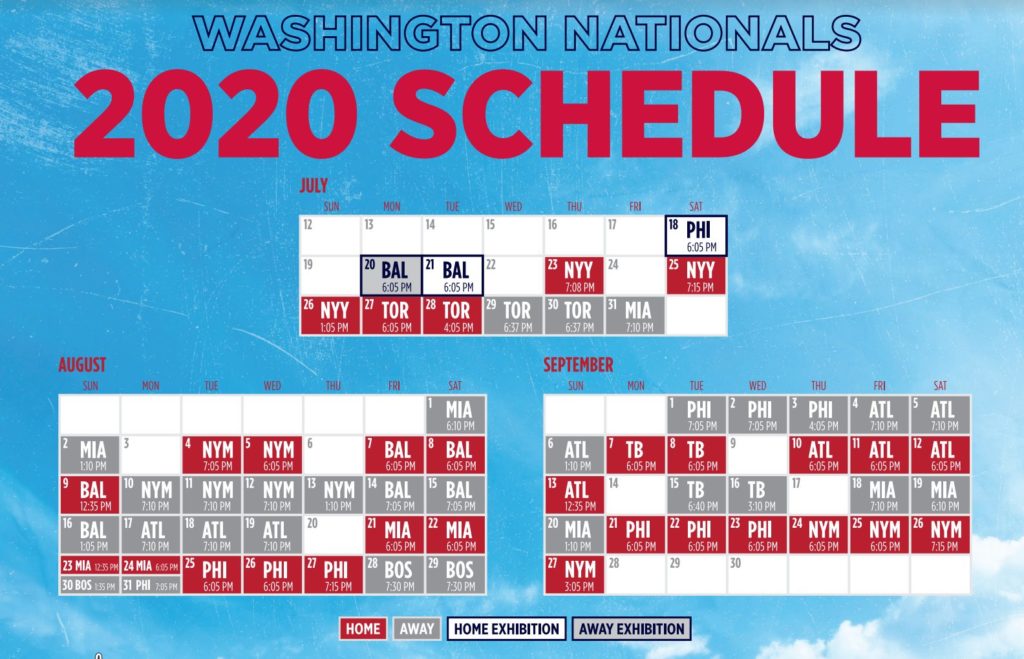 “Per MLB’s protocol, all players and staff were tested for COVID-19 on Friday, July 3. Seventy-two hours later, we have yet to receive the results of those tests. We cannot have our players and staff work at risk. Therefore, we have cancelled our team workout scheduled for this morning. [Monday]

“We will not sacrifice the health and safety of our players, staff and their families. Without accurate and timely testing it is simply not safe for us to continue with Summer Camp. Major League Baseball needs to work quickly to resolve issues with their process and their lab. Otherwise, Summer Camp and the 2020 Season are at risk.”

Be that as it may the Nationals also report:

“The Washington Nationals – in conjunction with Major League Baseball – announced their 60-game 2020 schedule on Monday, along with a three-game exhibition slate. The 16th season of Nationals baseball will commence with an Opening Day matchup on ESPN against the New York Yankees at Nationals Park on Thursday, July 23rd at 7:08 p.m. ET.

The opening of the 2020 season marks the first time the Nationals have held Opening Day at home in consecutive seasons since 2010 vs. Philadelphia and 2011 vs. Atlanta. Additionally, the matchup with the Yankees will be the first time in Nationals history that the team will open the season against an American League opponent.

Following the three-game opening series against the New York Yankees, the Nationals will face the Toronto Blue Jays in a two-game series. This will mark Toronto’s first visit to Nationals Park since June 2nd-3rd, 2015.

The Nationals will host five homestands, with the two longest being seven games – both of which come during the month of September. Washington will close the 2020 regular season with 14 of 16 games against National League East foes, capped by three games against the Philadelphia Phillies (Sept. 21st-23rd) and four games against the New York Mets (Sept. 24th-27th).

Washington will embark on four road trips, including two lasting 10 games. The Nationals will open their road slate with two games in Toronto, July 29th-30th, before travelling to Miami for three games against the Marlins, July 31st-Aug. 2nd.

The annual Beltway Series with the Baltimore Orioles will renew on Aug. 7th-9th at Nationals Park. The Orioles will host the Nationals, Aug. 14th-16th.”

More Stories
July 6 Coronavirus Data Posted: 10,569“Mayor Muriel Bowser urged the Council to seriously consider several key issues that are broadly problematic for sound budgeting and the operations of our government in the response and recovery from the pandemic and the recession it caused.”